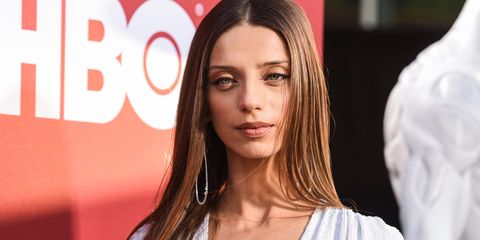 Westworld's second season is underway and it's already melting our brains at least as much as Season one did. The premiere picked up where the first season left off, but left us with more questions than answers and the show is already juggling several timelines in Season two.

Which is why we ambushed Westworld star Angela Sarafyan, who plays host Clementine, at Marie Claire's Fresh Faces event in Los Angeles this weekend and asked her to spill everything she knows about Season two. Of course, because she values her job, she couldn't tell us much. She did give a few small hints about what to expect from Clementine this season, however.

"You're going to see her freedom come to fruition," Sarafyan explained. "Her strength is definitely going to come out in the next few episodes."

That's good to know. All of the hosts are exhibiting more freedom and strength, but the real clue here is "in the next few episodes." We got a tiny, tiny glimpse of Clementine in episode 2, "Reunion," playing the piano at the party designed to win Logan's investment, but other than that, we haven't seen much of the wide-eyed, BFF of Maeve so far this season.

Speaking of Clementine's best friend, we did ask Sarafyan if we could expect to see her character reunite with Maeve, who is currently on a quest to find her daughter. Agonizingly, Sarafyan was even more coy about that.

"I think you're going to have to tune in to see that..." she teased, which means she probably will reunite with Maeve and when she does, it will probably be epic (or maybe that's just us projecting our hopes onto a very vague statement).

Related Stories
'Westworld' Season 2 Timelines Guide
Everything to Know About 'Westworld' Season 3
The 'Westworld' Cast Doesn't Know Episode Order
This content is created and maintained by a third party, and imported onto this page to help users provide their email addresses. You may be able to find more information about this and similar content at piano.io
Advertisement - Continue Reading Below
More From Culture
The 'Who Killed Sara?' Cast: Your Complete Guide
The 'Paradise City' Cast Plays Trivia
Advertisement - Continue Reading Below
Sad Movies for When You Need a Good Cry
What Happens When Prince Philip Dies?
Photos of Prince Philip with His Grandchildren
The Queen and Prince Philip's Marriage Timeline
'Too Hot to Handle' Is Coming Back This Summer
The New Netflix Original Films You Can't Miss
The Good and the Bad of Mom Influencing
Is Concrete Cowboy a True Story?