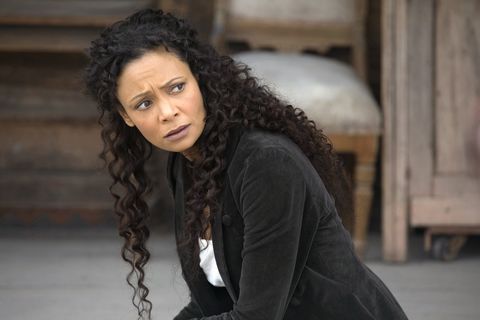 Westworld ended season one with a bang—one that took out Ford (played by Anthony Hopkins). Westworld Season 2 waited until its sixth episode to reveal what many fans have suspected since Dolores pulled the trigger to kill Ford: Anthony Hopkins is not done with Westworld.

Now, this has been hinted at before in the season. We've had some voiceover from Hopkins and even a tiny glimpse of the young Ford (a digitally created version of his image) in a reflection—but none of that really indicated that Hopkins was returning to the show in an meaningful capacity.

In "Phase Space," Bernard volunteers to go into the Delos mainframe to figure out where the new code making all the robots go crazy is coming from. He gets his answer in the final moments of the episode: It's Ford.

Of course, we all knew it was Ford. Ford has been present all season. In addition to the Hopkins voice over and the digitally-created younger Hopkins reflection, creepy robot kid Ford talked to William and sent him on his journey for The Door. Ford has also briefly taken over other hosts to communicate with William. He has been very William-focused this season—which makes sense. Season 2 is called "The Door" and The Door is for William.

But now, we have Ford, played by Anthony Hopkins, back in the game—even if it's only in the digital realm of the Delos "cradle" (CR4DL, the data center that stores all of the hosts' personalities). Many fans were not convinced Hopkins was gone for good when his character died in Season 1. After all, that could have been a Ford-shaped host that Dolores shot. Or he could have created a host version of himself to carry on his legacy. In a show like Westworld, death never has to be permanent.

So, what's going on with the rest of the Westworld crew?

Maeve finishes her adventure in Shogun World, but most of her newfound friends don't choose to join her on her quest back to Westworld to find her daughter (which is devastating, since Akane and Musashi quickly proved to be two of the best characters on the show).

Maeve does make it back to her old homestead in Westworld and to her daughter, only to find that another host has been programmed to fill her old role as the mother. Maeve saves her daughter from a Ghost Nation attack, but her daughter has no memory of her and it's, frankly, devastating.

Dolores and co. don't get much screen time this week, but they use what they do get well. First things first: The reprogramming of Teddy definitely worked and it sucks. Gone is our sweet cowboy with a heart of gold. In his place is a killer robot in a cowboy hat, who is now so fine with killing people, he sometimes does it just because they're annoying him.

Dolores, for her part, seems pretty conflicted about New Teddy. On the one hand, he's exactly what she thought she wanted him to be. But on the other, he now sucks and she seems to be able to tell. He's not the robot she fell in love with. Fingers eternally crossed for the return of Teddy 1.0.

Dolores, Teddy, Clementine, and the rest of their crew use the train to blowup the entrance to Westworld (basically the shiny space where everyone got to pick out their wild west gear and suit up). Are they blowing their way out of the park? Are they trying to take out the Delos control center? Whatever it is, it appears to be going exactly according to plan.

This content is created and maintained by a third party, and imported onto this page to help users provide their email addresses. You may be able to find more information about this and similar content at piano.io
Advertisement - Continue Reading Below
More From Culture
Why 'Fearless' Hits Different in 2021
'The Circle' USA Is Actually Filmed In the U.K.
Advertisement - Continue Reading Below
Pre-Order These Highly-Anticipated 2021 Books
The 25 Most Underrated Films Ever Made
Were the Paintings in 'This Is a Robbery' Found?
'Bridgerton' Season 2: Everything We Know
New True Crime Books You'll Obsess Over
The 'Who Killed Sara?' Cast: Your Complete Guide
The 'Paradise City' Cast Plays Trivia
Sad Movies for When You Need a Good Cry