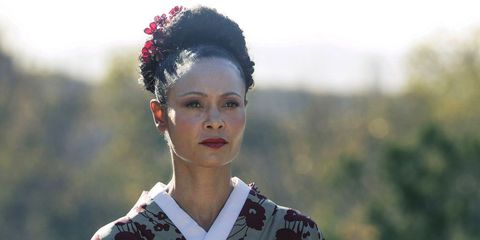 Westworld Season 2 got off to a slow and, TBH, needlessly confusing start. It was still interesting, of course, but more in a "let's all congregate on Reddit and argue for a week" kind of way than a "wow I'm engaged with this as a story" kind of way. Last week, things picked up thanks to an episode told almost entirely in flashback that explained the real reason Delos decided to invest in Westworld to begin with (immortality—James Delos wanted to be an immortal robot!).

Last week's episode, while fascinating, did not feature either of Westworld's main ladies/primary protagonists, Dolores and Maeve. To make up for it, this week's episode was basically entirely about the. Let's start with Dolores' story, because frankly, there's less to unpack there.

This isn't really such a reveal, right? She's already been in full Wyatt mode since the revolution and is not-so-subtly on a path for world domination. This week, she and Teddy connected (both emotionally and sexually) in a way we've never seen them connect before. Dolores explains that she needed to know if her feelings for Teddy were real or just part of her programming. Her conclusion: They're real. Yay, right?

Even though Dolores really loves Teddy, she really loves her mission of leading the robot revolution even more. She makes it clear, in no uncertain terms, that she thinks Teddy is a disease on that mission and too weak to be part of the solution—which, you know, makes him part of the problem. This goes back to Teddy's refusal to murder on command in Episode 3, and we all knew Dolores was going to have feelings about that.

It looked like we were in for another Deddy (Dead Teddy). It looked like that for most of the time Teddy was on screen, honestly. Dolores seemed on the verge of killing him literally every second of the episode. In the end, what she does is better for us (yay more James Marsden on the show) and maybe worse for Teddy: She reprograms him. For someone who believes in robots' right to freedom, this feels more than a little hypocritical. Very obvious theory: Dolores is headed for a downfall.

Now, onto the much meatier part of the episode: Everything that happens in Shogun World. After teasing the park for over a year, HBO finally really took viewers to Shogun World. Was it worth the wait? Yes. Yes, it was.

In Shogun World, we learn a few things that are going to be key to the plot of the series going forward:

1. The Delos employees are lazy.

Shogun World is just Westworld in Japan—like, literally. The settings and characters are nearly identical, down to the tattoo-faced badass women in each park:

Maeve has a counterpart in Shogun World, Akane, who runs a group of geisha. The storylines also cause major deja vu (we witness a safe heist identical to the one that goes down in The Mariposa in Season 1). Lee admits that this isn't a coincidence—he had to write 300 narratives in three weeks, so he reused some material.

Shogun World, like Raj World, is experiencing malfunctions similar to those happening in Westworld—the hosts are going off-script, but most don't seem to be aware that they're robots just yet. Maeve tries out her Jedi mind trick powers on the first Shogun World host she meets and is immediately disappointed by how ineffective it is.

The problem wasn't that Maeve doesn't still have incredible powers. It was that she was speaking the wrong language. Once she realizes she can speak fluent Japanese (as a madam, she was programmed to have easy access to an array of languages but, as Lee explains, all the hosts are able to speak every language, somewhere deep down), she's BACK.

2. Maeve can control other hosts with her mind now.

Oh, and more than that: Maeve realizes that she doesn't need to verbalize her commands anymore. She's able to telepathically control other hosts without saying a word. She makes this handy discovery when a ninja is about to kill her and she uses mind control to have him impale himself instead. So there's that.

Maeve's powers aren't limited to one-on-one encounters, either. Later in the episode, she takes on an entire Shogun army in exactly the same way, by forcing them to kill each other. This will, of course, be huge for the future of Westworld—well all the Worlds—and the human race, for that matter. Maeve could do what Dolores wants to do and rally all of the hosts to fight the humans. She could also, of course, do the opposite and completely dismantle Dolores' rebellion with a single thought.

3. Maeve might not be as pro-robot self-awareness as we thought.

And, honestly, I would lean toward her doing the latter. During a very important scene in the episode, Maeve starts to bestow self-awareness on Akane, only to have Akane recoil in pain at the very start of the process. In that moment, Maeve realizes that self-awareness, and the freedom that comes with it, comes at a price: You lose the belief in your own narrative, your own life story, and your own relationships.

When Maeve realizes that Akane sees Sakura, another geisha, as a daughter, she decides not to push the whole "realize you're a robot" thing on her. She doesn't want to take away that relationship the way she feels it was taken away from her in a way when she learned the truth about herself.

Of course, when Sakura later dies, that all goes out of the window, which is terrible for Akane, but great for us because she and Maeve make one hell of a team.