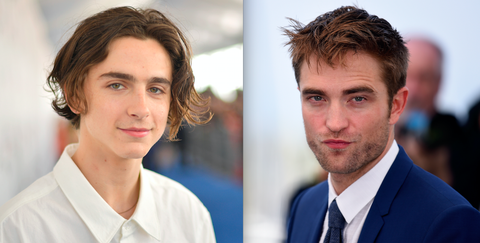 Hair ye, hair ye! Two of our mane men, Timothée Chalamet and Robert Pattinson, are starring in a Netflix drama together—and not just any kind of drama, the best kind of drama: PERIOD DRAMA!

Deadline reports that Timo and RPatz (do people call him Timo? And do we still say RPatz?) will appear together in Netflix’s feature The King, based on Shakespeare's Henry IV [Parts 1 and 2] and Henry V. It's-okay-to-think-he's-cute-because-he's-22-year-old Chalamet is playing Prince Hal aka young Henry V, and Pattinson will play French prince The Dauphin. Oh la la!

How brooding and princely of you, Robert!
Getty Images

The hair of a king!
Getty Images

The cast started filming in the UK today, so if you want to brush up on your Shakespeare ahead of The King's release, you can buy Henry IV Parts 1 and 2and Henry V on Amazon. Or, you can also pretend like you're in high school and Sparknotes the plays here, here, and here.

Sally Holmes Editor in Chief Sally is the Editor in Chief of Marie Claire where she oversees coverage of all the things the Marie Claire reader wants to know about, including politics, beauty, fashion, and celebs.
This content is created and maintained by a third party, and imported onto this page to help users provide their email addresses. You may be able to find more information about this and similar content at piano.io
Advertisement - Continue Reading Below
More From Culture
You *Need* to Follow the 'Bling Empire' Cast on IG
Watch the Trailer for the New 'Euphoria' Special
Advertisement - Continue Reading Below
We've Getting a Season 2 of 'Bridgerton'
New Drama Movies That Promise to Move You
The Sexiest New Movies of the Year
A Look Back at Princess Anne's Life in Photos
Where Is the Cast of 'Gilmore Girls' Now?
'The Bachelor' Is Back!
Who Is "Queen" Victoria on 'The Bachelor'?
Matt James' 'Bachelor' Cast: Everything We Know