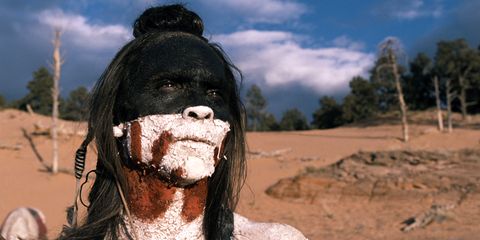 After Season 1, Westworld fans were left wondering how much more of the Delos parks we'd get to see. Honestly, I was in the camp that thought HBO would keep us guessing about the other parks until Season 3. Thankfully, I was wrong.

Season 2 brought fans not just to the highly-anticipated Shogun World, but to Raj World as well. The best new world of the season, however, isn't technically a new world at all. Episode 8, "Kiksuya," focused on Ghost Nation, the Native Americans of Westworld.

Even though Ghost Nation live in Westworld, we've barely seen them and none of their appearances have given us much insight into their goals or motivations. "Kiksuya" changed ALL of that.

So, what's up with Ghost Nation? Are they evil? Are they the good guys?

To paraphrase Jessica Rabbit, Ghost Nation aren't bad—they were just programmed that way. Before they were Ghost Nation, though, in the early testing phases of Westworld, they were a peaceful tribe with completely different backstories. As opening day approached, Delos decided to punch up their narratives and turn them into the aggressive, terrifying group we've grown to know.

Despite the behavior team's best efforts, however, the people of Ghost Nation are not bad. They're not following their narratives—and haven't been for way longer than the rest of the hosts in the park.

Wait, how long have Ghost Nation been conscious?

Akecheta, the leader of Ghost Nation, has been conscious for more than 35 years and he's been spreading the word slowly, but surely ever since.

So Akecheta happened upon the scene of Arnold's death—you know, when he had Dolores shoot him and a bunch of other hosts and, ultimately, herself. He saw the maze (the one Arnold created for Dolores to help her achieve consciousness) and it stuck with him in a big way. Suddenly, he was aware that things were not right in his world. The woman who had been the love of his life in his original narrative was with another man. He was now a violent warrior with the soul of a peaceful man.

Akecheta started drawing the Maze anywhere and everywhere he could—in the dirt, with blood, anywhere. Eventually, he finds a strange construction site that he believes is a door to the "right" world. (Some Reddit users theorize that this is actually the Valley Beyond and the same site as the lake from the first episode of Season 2.)

Akecheta kidnaps his girlfriend, wakes her up (in the consciousness-within-Westworld sense), and they share a beautiful reunion, both remembering their original narrative and their ~true love~. When he takes her to the Valley Beyond, however, it's gone. Delos employees find his girlfriend, shut her down, and take her back to the lab. When Akecheta returns to his tribe, hoping to find her returned, he instead realizes she's been replaced by another host.

This leads to Akecheta venturing through Westworld for years without dying—and, by extension, without being updated. Eventually, he decides to die so he can go below and find his missing girlfriend. He does and, even as the Delos technicians are supposedly running his update, he gets up, walks away, and explores Delos HQ until he finds cold storage, his girlfriend, and another retired member of his tribe.

Akecheta calmly walks back to the Delos lab, pretends to finish his update and gets himself released back into the park. Once back, he makes it his mission to help as many members of Ghost Nation achieve consciousness as possible. And, to protect them from being stripped of their consciousness when they die, he scalps them and draws the maze on the inside of their scalps.

Eventually, Ford realizes what's going on and confronts Akecheta in the park. He's impressed that he's managed to achieve consciousness and fly under the radar for so long. He assures him that the deathbringer (aka Dolores/Wyatt) will return to kill him (Ford) one day and that then Akecheta and his people will be able to find the new world.

Because Maeve's daughter was kind to him, Akecheta has always had a soft spot for her. As a gift, he showed both her and Maeve the Maze (meaning he's the one who woke Maeve up).

Maeve is barely alive, but still running the show.

Speaking of Maeve, she spends this week's episode on a gurney in the Delos labs, clinging to life. Lee is doing everything he can to get the technicians to save her, but they're more interested in saving the programming within her that allows her to control the other hosts. Also, fun fact: She's still doing her other host mind-meld thing even from her practically-comatose state. She's been, for lack of a better word, possessing her daughter's body and listening to Akecheta's story herself. She knows everything that we, the audience, know.

The Man in Black is also barely alive, and his future looks bleak.

Akecheta finds The Man in Black, wounded and dying, and takes him back to the Ghost Nation's camp. His plan is to heal William enough to prolong his life and cause him greater pain (in his defense, William spent decades terrorizing everyone in Westworld). Luckily (or maybe unluckily) for him, Emily comes along and negotiates his release—by promising he'll suffer more with her than with Ghost Nation.