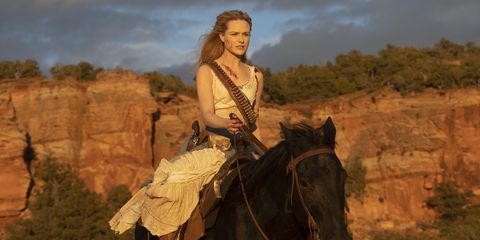 This post contains spoilers for Westworld Season 2, Episode 10, "The Passenger."

So, the Westworld Season 2 finale happened and...what the hell? As expected, the episode left us with more questions than answers. Let's dive right in.

Answered: What is The Door and what is the Valley Beyond?

The biggest answer we got in the finale had to do with The Door and the Valley Beyond, which are essentially one and the same. Ghost Nation was right: The Valley Beyond is another world for the hosts. It's not a door out to our world though. It's actually a virtual reality world created by Bernard for the hosts where they control themselves and humans can't find them. It's basically like heaven and The Door is a rip in the walls of reality that only the hosts can see. When they walk through The Door, they fall into a ravine, killing their physical bodies, while their consciousness is simultaneously uploaded onto the new world, house in the Valley Beyond.

Several of the hosts make their way through the door, including most of the surviving members of Ghost Nation and Maeve's daughter. Dolores also manually uploads Teddy to the Valley before leaving Westworld herself, sending him to robot heaven forever. Aww, right?

Answered: What happens to Dolores?

Dolores makes it out of Westworld—in Charlotte Hale's body. Confused? Here's the deal:

The Charlotte Hale you saw with Bernard right after the robot massacre and in the creepy basement lab and almost getting her brain sawed out by Dolores when the Cradle is destroyed, those were all the Real Charlotte. After Real Charlotte kills Elsie, causing Bernard to snap and go Team Dolores, he creates a host replica of her, and puts Dolores' pearl brain in that host. Then, Host Charlotte/Dolores kills Real Charlotte and takes her place, eventually leaving the park as Charlotte, with some help from Stubbs (who also might be a host?). She has five of the brain pearls with her when she leaves.

Outside of Westworld, Dolores heads to Arnold's old house, where Ford has left one of the machines that creates the hosts. There, she creates a version of her old body (because Evan Rachel Wood is still under contract, presumably), as well as a new version of Bernard. She reveals that they won't be allies in the coming years; they'll work against each other, and probably kill each other, but both be vital to the hosts' future.

Now onto the questions:

Question: Is Stubbs a robot?

When Host Charlotte/Dolores shows up on the beach looking to catch a ride to the mainland, she encounters one final obstacle: Stubbs, head of Delos security. Stubbs has been butting heads with Charlotte all season and seems to sense intuitively that she's a host. He also hints that he's a host, with a reference to his own cornerstone and orders coming directly from Ford.

Question: What happened to Maeve?

Not long after The Door opens and the hosts start making their way to the Valley Beyond, Zombie Clementine and the Delos agents show up to ruin everything. Zombie Clementine infects all of the hosts with the Delos-designed "Kill Each Other" directive and all hell breaks loose. Maeve runs to make sure her daughter makes it through The Door, freezing the fighting briefly to give her and her new mom to make it to the Valley Beyond.

Delos agents open fire on Maeve and she falls down, presumably dead. Later, on the beach, a Delos exec tells the two techs who traveled with Maeve all season to salvage any hosts they can, so it seems very likely she'll be back next season, but still in the park or at least under Delos control.

Question: What happened to the hosts who crossed to the Valley Beyond?

Dolores beamed the virtual world to a satellite so humans can never find and destroy the hosts' paradise. It's not clear if we'll check in on host heaven in Season 3. On the one hand, there are some awesome characters there. On the other hand, it feels like a distraction from the larger story.

Question: Did the Man in Black/William really kill his daughter?

Yes? Her body is lying on the beach with the dead at the end, but there's still no final, definitive resolution on the issue of her being a host. Regardless, the actress who plays Emily is sticking around, which brings us to...

Question: What in the actual F was going on in the post credits scene?

Oh, are you wondering what happened with William/The Man in Black? Well, he teamed up with Dolores early on in the episode (she finds him just after Teddy's death, while William is digging in his own forearm, looking for wires and other host-y things). Then, once they run into Bernard and he realizes he's found The Door, he's like, "I have no more use for you, so bye" and tries to shoot her. Unbeknownst to him, however, Dolores put the smashed bullet that killed Teddy in his gun, causing it to backfire and take off his right hand.

How is The Man in Black still standing, you ask? He's been shot, stabbed, and now had a literal body part blown up. Is he a host? Is he an immortal god? Is he a Sixth Sense-style ghost who only thinks he's still in Westworld?

Before the episode ends, we see The Man in Black hobble down to the elevator at the Valley Beyond, presumably stumbling off to kill Dolores or whatever it is he wanted to do by the end of the season (it really became murky). We also see a flash of him on the beach, after Host Charlotte/Dolores escapes. The next time we see him, it's the post-credit scene and he's stumbling out of the elevator into a dusty version of The Forge, the virtual reality server where Delos stored all of the guests' data. He's greeted by Emily, or at least a virtual version of her. She starts asking him the questions from the fidelity test James Delos had to undergo.

"I'm already in the thing aren't I?" he asks. But Emily replies, "No, the system's long gone" and "this isn't a simulation." Who even knows at this point, though? Was the entire season a simulation being run on The Man in Black? Was any of it real? Did he die on the beach and now he's being host-ified? Emily says this has been going on a long time, so it's possible that we're seeing something happening years and years after the events of Season 2.

Now, it's just a waiting game for the answers and a lot of Reddit theorizing until then.