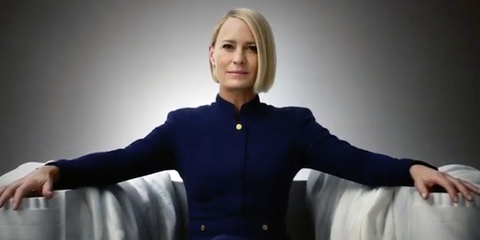 House of Cards is set to return later this year for its final season, sans Kevin Spacey. For the Netflix series' last year, Claire Underwood, played expertly by Robin Wright, is stepping up and taking the lead. In honor of the Fourth of July, Netflix has released a new teaser that highlights just how in charge Claire is going to be next season.

In the promo, Claire sits on a throne made to look like the iconic chair in the Lincoln Memorial, and addresses the audience (or, you know, the entire population of the United States, since she's president now).

"Happy Independence Day…to me," she says with typical Claire menace. Then another message flashes across the screen: "#myturn."

Netflix shared the new clip across social media, on Twitter and Instagram, along with the caption, "A message from the President of the United States." Wright's Claire is taking centerstage on the show now that Kevin Spacey's character, Frank Underwood, has been written off. Netflix made the decision to write Spacey off the hit series after allegations of sexual misconduct involving the actor broke last fall.

The transition of power on House of Cards will be seamless, however. Season 5 of the series ended with Frank resigning as President of the United States and being replaced by Claire (thus the #myturn hashtag). In true Underwood fashion, Claire manipulates Frank, takes control of the White House, and then denies him a presidential pardon.

Watch the new promo below:

Welcome to the office, Madam President.