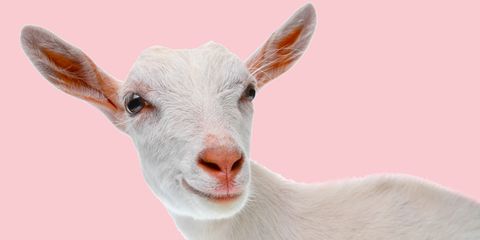 A few weeks ago, I reported on the story of over 100 escaped goats on the loose in a suburban neighborhood in Idaho. At the time, I requested we get at least one new goat story (with a happy ending!) per week until Donald Trump is no longer president. We’re batting a little below average, but the latest goat story—this time out of New York City—has 100 percent more celebrity involvement, which kind of makes up for it.

On Monday, around 10:30 a.m., the Metropolitan Transit Authority (known as the MTA, the organization that runs the New York subway system and which is not often regarded for its great sense of humor) sent out a bemused alert on its official Twitter account: “A new one for us (we think): Two goats are roaming along the N line tracks in Brooklyn. They’re safe and not currently affecting service, but they are on the run. We’ll keep you posted.”

You crazy for this one, goats. This story has everything: cloven hooves on the run, a major urban city, an air of mystery—and all without animal carnage or service interruptions? It’s...it’s perfect. The MTA tweeted a follow-up, with evidence:

According to the New York Times

Southbound N trains are running on the D line from 36 St to Coney Island Stillwell Av while the NYPD safely retrieve goats from the tracks. pic.twitter.com/oDy0KVk6PL

And finally, around noon, the MTA announced that NYPD had successfully removed the goats from the track.

But the story doesn’t end there. Later that day, the NYT reported that comedian Jon Stewart would help transport the goats to Farm Sanctuary in Watkins Glen, New York (he and his wife, Tracey, are long-time supporters of the shelter). There, the goats will live out their caprine days as free animals. A truly happy ending!

Once again, I request that we get at least one (1) story of this nature per week, until either Donald Trump is no longer president or we experience the inevitable heat death of the universe, whichever comes first.