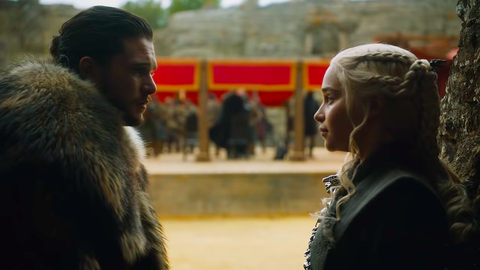 On Sunday night, HBO unexpectedly revealed a teaser trailer for its entire 2019 lineup—we're talking Big Little Lies and True Detective, along with a handful of others—which included some brand-new footage of Game of Thrones season eight. As Entertainment Weekly points out, the teaser trailer isn't entirely comprised of new footage—shots of the last season are interspersed with moments from season eight—but it's the first hint of what we can expect from the new season, which will be released sometime in the new year, most likely in April.

The trailer prominently features Jon Snow, played by Kit Harrington, and his sister Sansa Stark (Sophie Turner). According to EW, fans were initially confused as to whether footage of the two embracing was from this coming season or the last one—but EW confirms that it's actually from season eight, and shows a reunion between the two at Winterfell.

The clips show Jon Snow and Sansa Stark prepared to go into battle together, with the support of Daenerys Targaryen and Cersei Lannister, which is no huge surprise: Season seven's finale hinted that the White Walkers were coming for the ancient wall in King's Landing, and that a showdown with the Night King was imminent. This will be the last season of the hit show, so it's set to be the most dramatic (and bloody) yet.

Related Stories
Zendaya and Drake's Teen Drama Airs This Month
New Set Photos from 'Big Little Lies' Season 2
Jenny Hollander Director of Content Strategy Jenny is Marie Claire’s Director of Content Strategy, editing and writing about everything from politics to reality television to accessories and celebrity news.
This content is created and maintained by a third party, and imported onto this page to help users provide their email addresses. You may be able to find more information about this and similar content at piano.io
Advertisement - Continue Reading Below
More From Culture
Queen of the Screen
The 12 Sexiest LGBTQ+ Movies Around
Advertisement - Continue Reading Below
53 Wild and Completely Iconic Vintage Porn Films
Dale Moss Is a Super Important 'Bachelorette' Star
It's Been a Weird Year for 'The Bachelorette'
Political Books to Read Ahead of Election Day
The Sexiest Movies on Amazon Prime
HBO Is Giving Fans 2 Special 'Euphoria' Episodes
What to Know About Tayshia's 'Bachelorette' Cast
Clare Crawley's 'Bachelorette' Cast Is Out