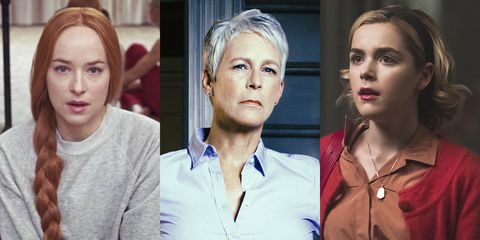 Everything feels terrible, because most of the time it is. Although the midterms saw the Democrats optimistically reclaim the House of Representatives, anyone even vaguely paying attention still has to deal with Trump's hateful recklessness almost daily. Last week, the president tried to rally his supporters against France and blamed the deadliest fires in California history on forestry mismanagement, rather than pay respects to those who lost everything. Before that Trump banned CNN journalist Jim Acosta from the White House, an unprecedented move towards restricting a free press. Next week? Your guess is as good as mine, but you can bet that whatever it is will age us all a thousand years.

Comfort is crucial in times like these. The worse things get, the more we need short escapes to recharge our brains and our hearts, to preserve enough of ourselves to fight another day. But while a part of me enjoys the brightness and beauty of, say, The Great British Baking Show, or the sharpness and kindness of Schitt’s Creek or The Good Place, an even bigger part has come to crave their artistic opposites. With each fresh hell, I rely on horror to be the pop culture blanket in which I can wrap myself.

Okay, so while nothing beats the perfection of watching the rise (and fall) of beautiful bakes, horror has, since late 2016, helped me cultivate some psychological battle armor. At the time, tired and drained and fighting what felt like a million things even before Trump was elected, I used old movies like The Shining or Scream as a form of training, just in case I ever needed to keep real-life danger at bay. It wasn’t actually training, of course, but feeling such intense emotions from a film felt like fortification against very real fears.

Maybe it’s because there’s control in scripted works. There’s an ending. There’s order and sense and (usually) clear-cut definitions of good and evil—a safe place where the anger and sadness and despair you feel daily can not only exist, but diffuse safely. Without that outlet in the midst of all this chaos, you will collapse in on yourself like a dying star.

"In horror, you’re supposed to confront the worst-case scenario."

On this season of American Horror Story, the Apocalypse gang lives a version of the worst-case scenario. Following the detonation of several nuclear devices, members of society’s upper echelon are sent to live in a small bunker with a select few who claim their job is to keep everybody safe. Which, of course, is much more complex than I’ve just described. Due to the group’s close proximity, the hopelessness of their situation, and the sadistic nature of certain characters, power is abused, alliances are formed, and cast members we’ve met in prior seasons re-introduce themselves in terrifying and disturbing ways. (Especially since the show doesn’t take place exclusively in said bunker and eventually delivers us unto the Antichrist’s doorstep. But I’m not about to give it all away.)

Like all of Ryan Murphy’s work, AHS: Apocalypse is graphic, gross, and over-the-top in its gory sensationalism. But while it eventually begins to explore themes of morality—and is, arguably, a commentary on the ease with which so many of us slip into the devil’s grip—it’s also a platform on which we can project our worst fears. Here’s what could happen if the world ended. Here’s what might happen when forced into a space alongside some of the world’s worst. Here’s how quickly you can lose yourself. Here’s something even worse than real life: Literal hell.

The Chilling Adventures of Sabrina uses restricted space similarly (as does its Netflix neighbor, The Haunting of Hill House), particularly since the small town of Greendale is both a safe place and a nightmare factory for its characters. Far from its TGIF predecessor, Sabrina’s Netflix counterpart commits herself to a life serving the Dark Lord as of midnight on her 16th birthday (it also happens to be Halloween, but horror movies are good for any time of year). Sabrina intends to hold onto her humanity, name, and right to choose, and spends the the rest of the season trying to walk the line between light and darkness while still maintaining some semblance of herself. It's scary, even if the level of horror pales in comparison to the grisly nature of Apocalypse.

Lack of gore aside, Sabrina presents us with the terrifying notion that we’re all inches from being betrayed by the people we love. The best horror stems from thinking you know someone, only to be proven wrong. You know, in the same way 53 percent of white women voted for Trump and sparked the horror movie in we’re all currently living.

Kiernan Shipka in The Chilling Adventures of Sabrina.
Netflix

The theme of getting duped is a particularly poignant motif that runs throughout the horror genre. Suspiria introduced viewers to a Cold War-era ballet school that’s—whoops!—actually run by a coven of witches whose battle for power results in bloodshed. In Scream, Sydney is betrayed by her boyfriend and his best friend. In Get Out, Chris is led into a trap by his girlfriend. And in Halloween, Laurie Strode is hunted down by her estranged psychopathic brother. Sure, we don’t learn of their familial connection until the sequel—and she didn’t trust him to begin with, since he was a stranger—but Laurie’s story still serves as a reminder that family isn’t always synonymous with safety. These films serve as physical manifestation of our worst fears, but at a slightly more comforting remove than real-life provides. It gives us the soothing illusion of being able to conquer them.

And that's why the horror genre is an incredible outlet for our anxious times. At its most basic, it serves us with a “Well, at least I haven’t resorted to cannibalism!” silver lining. But go deeper and it actually creates a space where the angst we feel all the time—from reading the constant barrage of horrible news, fearing for those we love, having to live on this planet right now, etcetera—can go...outside of our own psyches. In horror, you’re supposed to confront the worst-case scenario. We feel our spectrum of emotions over the course of a few hours and then we get back to work, taking the best parts of the heroes with us.

Victoria Pedretti in The Haunting of Hill House.
Netflix

Yes, heroes! Sure, the genre gives us villains who are evil embodied, but it also presents characters who are forceful, interesting, complex, and imperfect—women like Halloween’s Strode and her Final Girl contemporaries who, more often than not, survive.

Ultimately, resorting to horror over sweetness helps to remind me that, amidst the never-ending awfulness all of us are subjected to hourly, I'm stronger than I think. I can handle more than I realize and, when confronted by the real worst-case scenario, I can be brave. I can even prevail.

Related Stories
The Scariest Movies on Netflix
The Scariest Horror Movies of the '80s
This content is created and maintained by a third party, and imported onto this page to help users provide their email addresses. You may be able to find more information about this and similar content at piano.io
Advertisement - Continue Reading Below
More From Culture
The Top-Grossing Book-to-Movie Adaptations
Historical Films to Stream If You Loved 'Hamilton'
Advertisement - Continue Reading Below
A Look Back at Princess Anne's Life in Photos
Is Jack From 'The Circle' Cousin Greg?
Cristin Milioti & Billy Magnussen Play Trivia
The Most Unmissable Movies of 2021 (So Far)
Mother's Day Gifts to Show How Much You Miss Her
Get to Know Delessa From 'The Circle'
Movies That Just Feel Like Summer
Different Pride Flags and What Each Represents