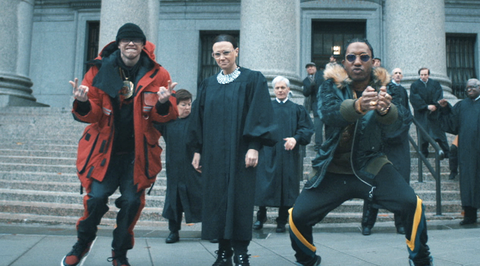 Earlier this month, Supreme Court Justice Ruth Bader Ginsburg made headlines and worsened political ulcers everywhere when she was hospitalized after falling and fracturing three ribs. The justice, known colloquially as "RBG," is a hero to many on the left and seen as one of the gatekeepers of liberal rights on the Supreme Court.

In response to the news, Saturday Night Live's Pete Davidson and Chris Redd recorded a parody rap in the beloved justice's honor.

"You know there’s only like one lady holding the whole damn thing together right? You think some broken ribs are going to keep her down?" Davidson and Redd ask at the beginning of the video. The answer? Hell naw and hell naw.

The segment, titled "RBG Rap," also featured Kate McKinnon, who reprised her role as the 85-year-old justice to bust some moves for the video.

“Live Ginsburg, and I ride for Ginsburg,” Davidson and Redd rap in the song's hook.

Other standout lyrics include:

"Tell Trump to stay out [of] her way / Don’t f**k with my Roe v. Wade / Supreme Court’s a boys club, she holds it down, no cares given / Who else got six movies about ’em who’s still livin’?"

"Survived the depression and Twitter attacks from Trump / Broken ribs can't even stop her, boy she eats that s**t for lunch!"

The end of the video, however, takes a quick moment to swipe at millennials who may adore RBG without actually knowing much about the specifics of her career.

"Yo, tell 'em your favorite RBG decision, dawg," Redd says to Davidson at the end of the video.

So, watch this video and then study up on some of RBG's most important and influential decisions. 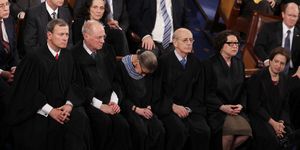 RBG "Wasn't 100% Sober" During State of the Union
Here's Felicity Jones as Young Ruth Bader Ginsburg
This content is created and maintained by a third party, and imported onto this page to help users provide their email addresses. You may be able to find more information about this and similar content at piano.io
Advertisement - Continue Reading Below
More From Culture
The Best Easter Egg in 'Behind Her Eyes'
The Best Memes of 2021 (So Far)
Advertisement - Continue Reading Below
The Best Psychological Thrillers of All Time
The Top-Grossing Book-to-Movie Adaptations
A Look Back at Princess Anne's Life in Photos
The Best Shows to Stream on Every Platform
Where Is the Cast of 'Gilmore Girls' Now?
Who Is "Queen" Victoria on 'The Bachelor'?
Everything We Know About Matt James
Who Is Rachael on 'The Bachelor'?