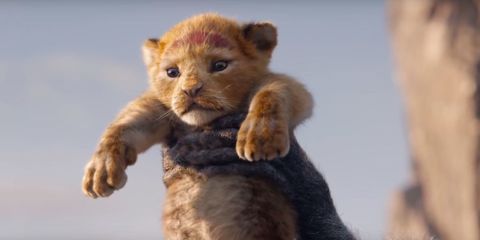 Disney has struck gold over the last few years by releasing live-action remakes of its animated classics and, in 2019, it will release a new version of its most successful animated feature of the '90s, The Lion King.

The latest live-action remake from the studio isn't really a live-action remake at all, since as real as the animals in Jon Favreau's take on the story look, they're still animated. It's worth noting this up front because honestly, once you're watching the movie, you'll probably forget that Disney didn't just tame and train a group of really emotive lions and meerkats and warthogs and hyenas to bring this story to life.

Favreau showed off this photorealistic computer animation in 2016's The Jungle Book (which was technically a live-action remake because a real human boy played Mowgli, but the bulk of the film's characters—you know, the jungle animals—were CGI) and it might look even better this time around.

The trailer, which is narrated by Mufasa, will give fans of the original movie chills. Why? Well, James Earl Jones, who iconically voiced the OG king of the Pride Lands in the 1994 film, is reprising his role in the 2019 remake. And yes, he's still got it:

Jones' voice isn't the only nostalgic thing about the new trailer. The whole thing is essentially a shot-by-shot remake of the 1994 film's trailer. Seriously, watch the video below:

Here's a side-by-side of 'The Lion King' trailer with the same scenes from the 1994 original movie. #TheLionKing pic.twitter.com/nHpKHWDzPJ

This isn't a new marketing strategy for Disney. The studio also did a shot-by-shot copycat trailer for 2017's Beauty and the Beast remake starring Emma Watson:

And, to a slightly lesser extent (emphasis on slightly) with the first trailer for its upcoming live-action Aladdin adaptation:

Related Stories
The Best Reactions to Beyoncé in 'The Lion King'
Watch the Live Action 'Aladdin' Teaser Trailer
Kayleigh Roberts Contributor Kayleigh Roberts is the weekend editor at Marie Claire, covering celebrity and entertainment news, from actual royals like Kate Middleton and Meghan Markle to Hollywood royalty, like Katie Holmes and Chrissy Teigen.
Advertisement - Continue Reading Below
More From Culture
Sydney From the 'Bachelor' Knows Hannah Brown
The 10 Hottest Movies on Hulu Right Now
Advertisement - Continue Reading Below
'The Bachelor' Has Already Finished His Season
When Michelle Carter Is Expected to Walk Free
How Much Time Did Michelle Carter Get in Prison?
'Bachelor' Peter Made a Hilarious Video As a Kid
31 Movies That Are Only About Sex
Who Is 'Bachelor' Contestant Mykenna Dorn?
The Best Love Songs of 2020 (So Far)
A New Show About the Royals Is Coming to HBO Max