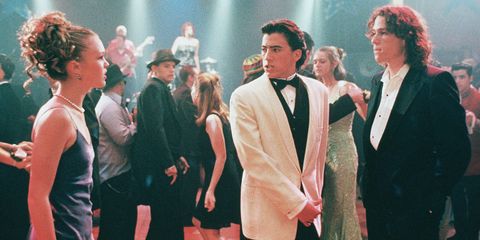 As someone who grew up as a scene teen who threw hundreds of dollars on Saving Jake band t-shirts from Hot Topic despite not knowing a single Saving Jake song, I feel that no movie better highlighted my angst and feelings quite like 10 Things I Hate About You. I was moody! I wrote poems! Okay, I mainly just rewrote my MySpace bio, but you get the gist. Even right now, listening to the major cover song from its soundtrack, “I Want You to Want Me,” my bangs grew three inches to cover one eye and my pen intentionally appeared on my shoes in the form of diamonds and hearts. Oh god bless youth.

I wasn’t the only one who loved this film, which dominated the box office in the spring of 1999 (debuting at number 2 behind The Matrix) and became a cultural favorite emblematic of its time. I mean, with its basis in Shakespeare (Taming of the Shrew in case you're not literary), how could it not?

As with nearly all instant classics, 10TIHAY also shot its young stars into the spotlight, putting these now–household names on the film map. Sure, they’d acted before, and SURE, Joseph Gordon-Levitt had been on TV, but I’m talking major films and stories that don’t involve Martians living in the suburbs. So, while considering who could possibly take on the burden of doing justice to a beloved teen classic, I thought: Who is ready for their time in the box office sun? These future heart-throbs, that's who. Here, a new crop of stars ready to move from the streams to the screens...what do you think?

For someone who spells Debby with a ‘Y,’ Ryan is pretty cool. Part of the second class of Disney stars to come into prominence (she was Jessie in...Jessie), Ryan would make a perfect modern Kat what with all the teen angst she brings to her characters. Her leading role on Netflix’s Insatiable shows this, but in the 10 Things remake, she won’t be a pageant queen who also, like, kills people? To be honest, I could only watch the first episode of that show before thinking: Not for me, but happy for the cast! What I did get from that one episode is a reignited love for Debby and an appreciation for her range as an actor. She can mix edginess with humor, and you’re never not rooting for her: all perfect qualities to fill the shoes of Stiles.

In his major American debut (after getting his start on Australian TV), Ledger stole the hearts of teenage girls and boys everywhere with his portrayal of weird-but-hot loner Patrick Verona in this film. A bad boy, who's actually just a good boy putting up a front (aren’t they all, ladies? JK, a lot of them suck). Who else immediately comes to mind when I think of that? KJ Apa in his role as Archie on The CW’s Riverdale. He’s the new teenage dream (okay, fine, mine too) and can make your heart melt—even when he might be in prison. Besides, Riverdale's pure camp has KJ beyond trained for one of the best parts of the flick: when Patrick serenades Kat on a damn FOOTBALL FIELD.

Because I like my takes like my body temperature—sizzilin’ hot—I want to let you all know that I saw To All the Boys I’ve Loved Before, and I thought Israel’s character was the ::emoji-heart-eyes:: catch. COME AT ME, KIDS! Netflix romantic comedies aside, Israel would make the perfect JGL2.0—he’s geeky, but like, in the Hollywood way. (Side note: Why has he never had a dating show called Levitt or List It?)

Okay, he may be *just a bit* older than the rest of the cast, but this is Hollywood: A male actor can play a teenager until they’re forty-five, and a female actor has until her Sweet Sixteen before she gets offered the role of ‘Disgruntled Mom’—God Bless the system! (Hopefully it's changing and all, but for now...) Coincidentally best friends with Debby Ryan, I think it would be so fun to watch Posey and Ryan act as enemies; something I should probably ask a therapist about. Also, he has such a pretty-boy face that it's totally believable he would be in a commercial for a nose spray brand, plus can play a rough-enough character (as seen on MTV’s Scream) that you won’t feel all that bad when he gets punched in the face.

At least this is better than if they were remaking it in 2013, when the poem would just have been a Vine. KIDS, PLEASE KEEP READING. ANYTHING. PLEASE!

Related Story
Who Would You Put In a 'Bridget Jones' Reboot?
Danny Murphy Culture & Social Editor Danny is the cultural and social editor for BestProducts.com where he's been covering crazy trends, celebrities, and anything else insane since 2016; He has also contributed to Marie Claire, Delish, and Medium. When he's not looking for the next viral sensation online, you can find him watching Bravo, drinking a third cold brew, or trying to convince people to go to karaoke.
This content is created and maintained by a third party, and imported onto this page to help users provide their email addresses. You may be able to find more information about this and similar content at piano.io
Advertisement - Continue Reading Below
More From Culture
'The Undoing' Is Based on a Beloved Book
Who Is Hugh Grant's Wife?
Advertisement - Continue Reading Below
Queen of the Screen
The 12 Sexiest LGBTQ+ Movies Around
53 Wild and Completely Iconic Vintage Porn Films
Dale Moss Is a Super Important 'Bachelorette' Star
It's Been a Weird Year for 'The Bachelorette'
Political Books to Read Ahead of Election Day
The Sexiest Movies on Amazon Prime
HBO Is Giving Fans 2 Special 'Euphoria' Episodes