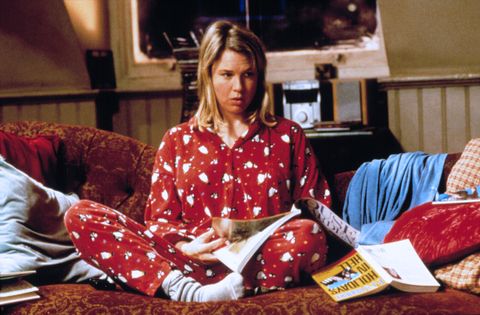 Known to many, or at least to me, as the more relatable, more British Carrie Bradshaw, Bridget Jones is the single person’s psychological id made human. Messy, tipsy, and thirsty for love, who among us hasn’t channeled Bridg as we send that 2am “heyyy” text with a glass of Chardonnay in our hand?

When it came out in 2001, Bridget Jones Diary was an instant success—not necessarily surprising, box office-wise, since this was back when rom-coms routinely made bank, but it was also, somewhat unusually, lauded as a critical favorite. In fact, from now on I refuse to refer to it as anything besides The Academy Award-Nominated Bridget Jones’s Diary, thanks to Renée’s Best Actress nod for the lead role.

But the big issue some people had with the film that launched a successful trilogy of adorable rom-com romps was its casting of an American in a classic British role. It is with that in mind that this Recasted attempts to reimagine the Bridget Jones origin story, with actors from the right side of the pond.

I feel nervous even admitting this due to the die-hard nature of its fandom, but I don’t watch Game of Thrones. To me, the viewing experience is like watching a sporting event set at Medieval Times: A bunch of people on different teams shouting and fighting, while I’m just confused in the corner, dipping pita chip crumbs into hummus and thinking, Wait, who is that?

But I do watch E! News, where Sophie Turner has been everywhere of late, thanks to being one of the many engaged couples taking over the world this year. After becoming obsessed with her because she is British, I realized she has the perfect mix of charm and confidence to pull off running pantsless in the snow in order to chase her love interest. Not to mention, she doesn’t need to attend the Renee Zellweger School of Faux British Accents (my alma mater).

Remember how I was nervous admitting I don’t watch Game of Thrones? Well this admission is even harder to make: I never read Harry Potter. I know! But hear me out: My nemesis in elementary school threw a Harry Potter-themed party and I blamed Harry at least in part for my childhood rivalry. That said, if you told me what Neville Longbottom actor Matthew Lewis would end up looking like, I would have at least SparkNotes’d it.

Anyway, Lewis would be a perfect Daniel Cleaver, a character who you immediately melt for the moment they walk on-screen. It takes a certain type of gorgeous man to convince someone as hilariously self-aware as Bridget to fall into their fuckboi traps—never forget how she found out he cheated on her while she’s dressed as a Playboy bunny. But I feel like I’m not alone when I say that Matthew Lewis could show up two hours late for dinner and I’d be the one apologizing for eating three baskets of bread before he got there.

Mark Darcy is the less suave answer to Daniel Cleaver, but you get the vibe that underneath his snark and arrogance is a good man (though I might just be easily swayed by anything remotely British). Former child actor Freddie Highmore is having a grown-up moment this year, or as much of a moment as anyone could have leading an ABC medical show.

Do you see his face? He clearly has a heart of gold and you immediately want to root for him. How could you not? Also, as this movie proved, nice guys know how to kiss.

Original: “All By Myself” by Celine Dion

The opening to Bridget Jones’s Diary is a modern-day classic. Not only is it painfully relatable, but it sums up the main character perfectly: She loves love, but also loves attention and being melodramatic and chain-smoking in her apartment. What a queen! Plus, it perfectly sets up the rest of the movie. This is how she’s ringing out a year, and there’s nothing more understandable than ditching your “New Year, New Me” resolutions for a case of Sauvignon Blanc by January 6th.

That’s why while Celine’s ballad is the perfect soundtrack for the original, and the new Bridget could have a ton of fun belting out the heartbreak classic of our generation, “Someone Like You,” into a pint of ice cream or three martinis.

Related Stories
Who Would You Cast in a 'Clueless' Remake?
Who Would You Cast in a ‘Cruel Intentions’ Remake?
Who Would You Put in a 'Titanic' Remake?
Danny Murphy Culture & Social Editor Danny is the cultural and social editor for BestProducts.com where he's been covering crazy trends, celebrities, and anything else insane since 2016; He has also contributed to Marie Claire, Delish, and Medium. When he's not looking for the next viral sensation online, you can find him watching Bravo, drinking a third cold brew, or trying to convince people to go to karaoke.
This content is created and maintained by a third party, and imported onto this page to help users provide their email addresses. You may be able to find more information about this and similar content at piano.io
Advertisement - Continue Reading Below
More From Culture
Fans Are Ready for Second Season of 'Bling Empire'
What We Know About Part 2 of 'Lupin'
Advertisement - Continue Reading Below
You *Need* to Follow the 'Bling Empire' Cast on IG
Watch the Trailer for the New 'Euphoria' Special
We've Getting a Season 2 of 'Bridgerton'
New Drama Movies That Promise to Move You
The Sexiest New Movies of the Year
A Look Back at Princess Anne's Life in Photos
Where Is the Cast of 'Gilmore Girls' Now?
'The Bachelor' Is Back!