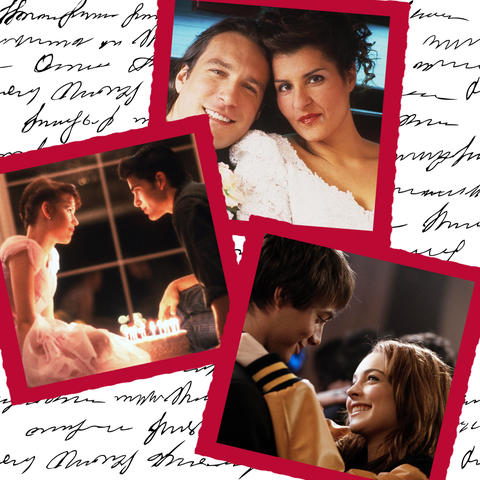 How do you define a romantic comedy? Like, really define it? I'm not talking about the obvious ones like When Harry Met Sally or The Proposal or My Best Friend’s Wedding—what about the ones that could go either way? The movies that sure seem like they should be considered romantic comedies, but that divert in some critical ways.

As we prepared for Rom-Com Week, the editors at Marie Claire debated (heatedly!) what it really means to conform to the romantic comedy genre and which movies fit the bill. Turns out, we don’t always agree! Though we eventually took our questions to the experts and came up with a working definition of a rom-com, we want to know what you think.

So help us out by voting on whether the below movies are rom-coms, and then check back Wednesday to see what our experts say about these choices.

Let’s start with an easy one:

It's got family, it's got a wedding, it's got some hilarious lines ("Put some Windex on it!")—but is it a romantic comedy?


This movie is very funny and very sexy! But do you think it counts?

A classic film about revenge on men, but only debatably a rom-com. Right?

You think I'm gorgeous, you want to hug me, you want to kiss me...But do you want to vote for me to be considered an actual rom-com? Think hard about this one.


The quintessential mumbly pregnancy comedy with teens, but is it a rom-com?

The most romantic movie with a 9/11 joke in it ever made, hands down. But is it a rom-com? Really?

One time, at band camp, I thought about whether American Pie was a romantic comedy. What say you?

Okay, but what about its third sequel, American Wedding? Kind of romantic, non?

This one could go either rom-com or pure com, depending on your point of view.

All's fair in love and basketball, baby! Is this a rom-com?

This one is indisputably one of the best movies of the last few decades, but its status as a rom-com has been intensely debated in our office.

It stars some comedy kings, but it's also quite romance-y. Your thoughts?

Look, we all love The Princess Diaries. But a makeover montage doesn't necessarily make it a rom-com. So is it?

Is it a weirdo comedy, or a proto Pretty Woman?

Jason Segel is nude and has a puppet musical and is in a love triangle. Your thoughts on this?

Katherine Heigl is a mid-aughts rom-com queen, which is a point for Knocked Up's inclusion. But! She also famously said this movie was a little sexist in its portrayal of women (a comment that, though totally not wrong, really hurt her career). So does it count?

10 Things I Hate About You

It's based on Shakespeare, has got Heath Ledger at Peak Sexiness, and has a supremely underrated soundtrack. Is that enough to qualify it for inclusion into the romantic comedy canon? You decide!

I'm personally of the opinion that Matthew Lillard in anything automatically makes that thing a teen comedy, but this movie pretty much invented certain rom-com tropes. So cue up Sixpence None the Richer and tell us: Does it count?

A League of Their Own

This movie will make you laugh, cry, and love Madonna even more than you already did. But is it a rom-com?

The movie that's arguably responsible for making women-centric comedy movies excellent again! But tell me, is it a rom-com?

Thanks for voting! Check back at the end of the week for the official definition of a rom-com—and what it might mean for your fave.

More Rom-Com Coverage, Right This Way
It's Rom-Com Week on Marie Claire!
The Very Best Rom-Coms of All Time, Ranked
Who Should Star in a ‘Charade’ Reboot?

Cady Drell Culture Editor Cady is the Culture and News Editor for MarieClaire.com, as well as a noted Timothée Chalamet enthusiast.
Advertisement - Continue Reading Below
More From Culture
Jennifer Lawrence Will Star In a Netflix Film
Who From Bachelor Nation Will Be on the 'Games'?
Advertisement - Continue Reading Below
The Best Romantic Films of the Year (So Far)
An Investigation Into the Next 'Bachelorette'
Mindy Kaling & Priyanka Chopra Team Up
How the 'To All the Boys 2' Soundtrack Was Made
Does 'Bachelor's Madison Prewett Self-Eliminate?
How Much Does 'The Bachelor' Make?
Tales of a Hollywood Con Queen
Who Will Be on 'Bachelor in Paradise' in 2020?