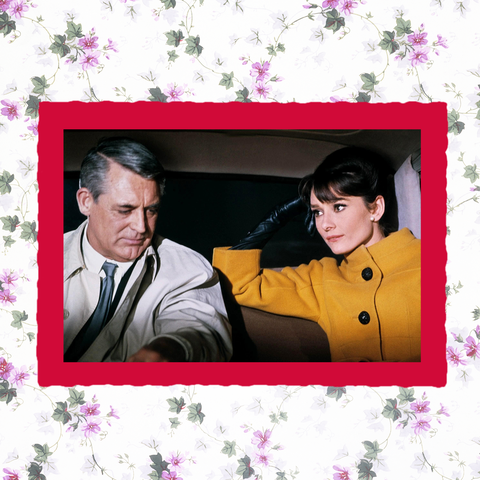 Let me ask you something: What more in the world do you want than Audrey Hepburn, a twisty mystery, and Paris? Exactly, nothing. And 1963’s Charade has all of that and more. One of the original romantic comedies, it’s paved the way for all the other films we’ll see in this special Romantic Comedy Recasted series (running all week on MarieClaire.com!)

Since this movie stars two of the greatest stars of all-time—Cary Grant and Audrey Hepburn—a fantasy recast cannot be taken lightly. We need people who are beautiful, talented, and down for a heist. Fortunately, this new cast checks all of those boxes and more. I believe in this recast so much that I’m dusting off a spot on my Ikea dresser to make room for a Golden Globe.

Before we get into the recasting, I thought you’d all like to know a fun anecdote about this film: The original script was inexplicably unsellable, so writers Peter Stone and Marc Behm turned it into a book and released it in pieces, in a magazine, under a new name (the now-title Charade). Guess who saw those pieces and fell in love with the story? The same movie companies who initially rejected it, of course! So let this be a lesson to you: If you try hard enough, your dreams will come true and Audrey Hepburn will be involved.

There’s beauty, and then there’s Natalie Portman and Audrey Hepburn. There’s talent, and then there’s Natalie Portman and Audrey Hepburn. Not only do these two have immeasurable looks and skills in common, but they’ve also both used their status to advocate for change in the world. And if there’s anytime we need Natalie Portman on a press tour, it’s before the 2020 election. Even if you’re not a fan of the film Charade (1. How dare you?), just imagine Portman on the couch with Senator Kamala Harris talking about the election, Hollywood, and whatever else Stephen Colbert is thinking for them. If that is not enough to get this film remade with this cast, then there’s little hope for democracy.

Grant was a bit older than Hepburn, because that’s Hollywood. Age-and-gender issues aside, Cary Grant is an incredible talent and also aged better than any boxed wine from Trader Joe’s I’ve ever had. Which is why Peter Gallagher, original Dad Crush for any viewer of The O.C., is primed for the part. He’s at his best in a suit and can convince anyone of anything at anytime, making him perfect for this role.

Billy Eichner is making his way to the mainstream, from his guest spot on Parks & Recreation to his role in Friends From College, that Netflix show random people tell you to watch but you never actually have. First known as the funny guy who shouts at you on the street, he’s come a long way from his digital series and has the powerful ability to take his comedy into some more dramatic realms—like, say, playing a C.I.A. administrator. Also, just look at him! He’s the very definition of Old Hollywood Glamour.

Adding another immensely talented comedian to the mix, John Mulaney like Eichner (whom he guest starred opposite on Difficult People!) oozes timeless charm. Mulaney doesn’t have as many straight-up acting credits to his name as Billy does, but I feel that no one would be opposed to having John Mulaney playing a John Mulaney-esque Tex Panthollow. And no spoilers here, but let’s just say it helps that he looks a bit like someone else that was recasted for a semi-plot-twist down the line that may or may not be true. OOOOH!

More Rom-Com Coverage, Right This Way
It's Rom-Com Week on Marie Claire!
Pop Quiz! Are These Movies Rom-Coms?
The Very Best Rom-Coms of All Time, Ranked

Danny Murphy Culture & Social Editor Danny is the cultural and social editor for BestProducts.com where he's been covering crazy trends, celebrities, and anything else insane since 2016; He has also contributed to Marie Claire, Delish, and Medium. When he's not looking for the next viral sensation online, you can find him watching Bravo, drinking a third cold brew, or trying to convince people to go to karaoke.
This content is created and maintained by a third party, and imported onto this page to help users provide their email addresses. You may be able to find more information about this and similar content at piano.io
Advertisement - Continue Reading Below
More From Culture
New Drama Movies That Promise to Move You
The Sexiest New Movies of the Year
Advertisement - Continue Reading Below
A Look Back at Princess Anne's Life in Photos
Where Is the Cast of 'Gilmore Girls' Now?
'The Bachelor' Is Back!
Who Is "Queen" Victoria on 'The Bachelor'?
Matt James' 'Bachelor' Cast: Everything We Know
Get to Know Serena Pitt From 'The Bachelor'
The Best Lesbian Movies Streaming on Netflix
Listen to the Best New Love Songs of 2021 (So Far)