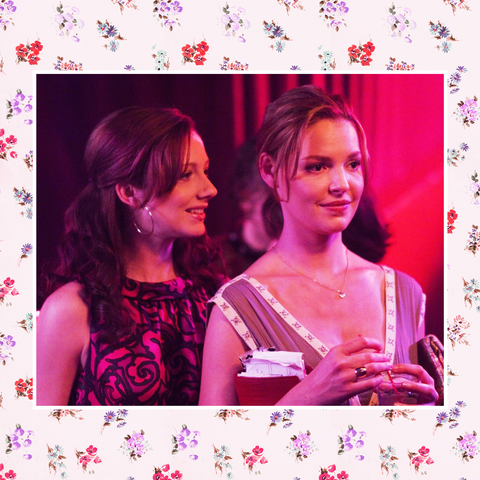 The best friend is at least the third most important person in a rom-com (we might even say that sometimes she's more important than the love interest). The protagonist's right-hand lady is many things: the voice of reason and a co-conspirator, the one moving the plot along and providing comic relief. But the characters themselves are often thinly written, without their own backstory, full arc, or—worst of all—happy ending. What a waste! So we asked the actresses who played some of the genre's most iconic best friends to write the full stories their characters never got.

First up: Judy Greer as Casey, the randy coworker and confidant of Katherine Heigl's Jane in 27 Dresses.

We last saw Casey up at the altar as a bridesmaid for Jane, conveniently across from Trent, Kevin's best man—yeah, they definitely hooked up at the reception. And even though she told Jane that she could shorten that yellow bridesmaid dress and wear it again, did she? Hell no.

Soon after those nuptials, Casey quit Urban Everest. She could not wait to get out of there. She was only staying because of Jane—and because she hadn't had sex with everyone in the office yet. Casey was never really that into outdoor wear and gear...just the guys inside it.

She spent some time making the rounds in the New York City club scene with Tess—Casey wanted to hate her, but she's just too fun to party with—before realizing that she had a great business idea in front of her.

Casey was a trailblazer in dating app technology, creating a Tinder predecessor—and even becoming her own best customer...until a ski weekend in Aspen for New Year's changed everything. She broke her leg skiing and fell hard for the local urgent care doctor who set her leg. Casey sold all her shares in her company and moved to Colorado to be with her true love.

Naturally, Jane was maid of honor at the wedding.

More Rom-Com Coverage, Right This Way
Is All Rom-Com Love Based on a Lie?
Pop Quiz! Are These Movies Rom-Coms?
The Very Best Rom-Coms of All Time, Ranked
This content is created and maintained by a third party, and imported onto this page to help users provide their email addresses. You may be able to find more information about this and similar content at piano.io
Advertisement - Continue Reading Below
More From Culture
See Inside Julianna Margulies's Personal Library
Could 'Manifest' Come Back for a Fourth Season?
Advertisement - Continue Reading Below
The Most Unmissable Movies of 2021 (So Far)
The Eternal Sunshine of Juno Temple
Let's Talk About That 'Virgin River' Cliffhanger
Zendaya Shared a Teaser of 'Euphoria' Season 2
'Ginny & Georgia' Season 2: Everything We Know
Wait, Where's Hope in 'Virgin River'?
'Virgin River' Season 4: Everything We Know
The Greatest Comedy Series of All Time