Today's Top Stories
1
And Now, a Word From the Future Voters of Iowa
2
Read 'Followers' With Us in February
3
Untangling Hair Bias
4
Blake Lively Made a Glam Return to the Red Carpet
5
Found: The Best Night Cream for Your Skin Type
HBO
This post contains spoilers for Game of Thrones, Season 8, Episode 2, "A Knight of the Seven Kingdoms."

Game of Thrones returned tonight with an episode that was almost entirely dedicated to how the various characters gathered at Winterfell to fight for the living in the impending battle against the Army of the Dead are preparing and spending what might turn out to be their last night on earth.

Arya Stark decided to lose her virginity to longtime crush, sexy blacksmith Gendry. Tyrion and company drank the night away. Tormund attempted to seduce Brienne of Tarth. Jaime Lannister successfully knighted Brienne of Tarth, in a beautiful moment had fans tearing up. And Jon "Expert at Terrible Time" Snow decided to break the news to his lover/secret aunt Daenerys Targaryen that he isn't a bastard after all because his mom is Lyanna Stark and his dad is Dany's big brother, Rhaegar Targaryen.

This is significant for two reasons: First, it means that Dany is Jon's aunt and they've been engaging in loads of incest for a while now. Second, it means that Jon is the true heir to the Iron Throne. Dany was exclusively concerned with the latter and Twitter had thoughts about that. Here are some of the best Twitter reactions to Dany's reaction to the news.

Dany: SO WHAT YOU'RE SAYING IS YOU WANT THE IRON THRONE?!?

WHY CAN JON TOUCH AND RIDE YOUR DRAGONS DANY?! HAVENT YOU BEEN WONDERING? pic.twitter.com/XE1RlB4JJT

Jon: So I’m Aegon Targaryen
Dany: um no my brother was a thief and a rapist
Jon: no they were marri-
Dany:#GamesOfThrones #got #DemThrones pic.twitter.com/TPr5LSU60V

#GameofThrones Dany, Jon and Sansa all wondering who has a claim to the throne and who becomes the rightful heir to the throne.

Jon and Dany finding out about Jon’s lineage.

Jon- So you’re saying that my father was a liar?!

Dany- You have a claim to the Iron Throne?!

Can we talk about the fact that the most chemistry Dany and Jon have ever had happened tonight... when she was clearly contemplating whether or not to murder him. 🤷🏼‍♀️ #GameOfThrones

Everyone is talking about Dany's reaction, which was huge for sure and sets her up as a final villain, BUT how about Jon's reaction??? Until now you'd expect him to go "but I don't care about that, I'm not trying to be King of the 7 Kingdoms", but homie didn't do that did he!!!

Dany finding out Jon is Aegon Targaryen and rightful heir to the iron throne #GameOfThrones pic.twitter.com/tblxBWDj9x 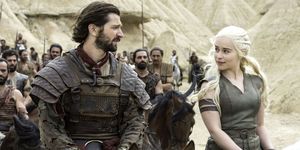