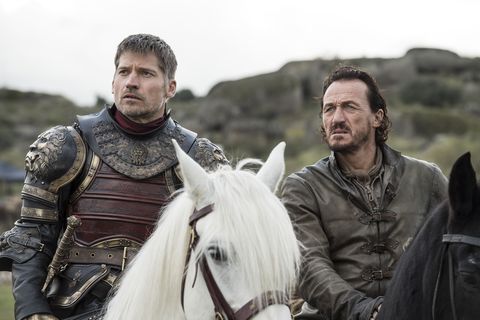 This post contains spoilers for Game of Thrones Season 7. Stream past seasons here.

Game of Thrones ended Season 7 with a lot of big changes. Viserion (Daenerys' yellow dragon) was killed and then resurrected by the Night King, so now he's a terrifying zombie ice dragon.

Jon Snow and Daenerys got intimate, just as the show confirmed that they're super related (she's his aunt).

And, back in King's Landing, Jaime left his sister/lover's side for the first time, well, ever. After Cersei reveals to Jaime that her promise to help the North fight the war with the dead was a complete lie, he abandons her to go and fight with the good guys. This is a far cry from the Jaime Lannister of the pilot, who pushed Bran Stark out of tower because he saw the oldest two Lannister siblings engaging in twincest.

Jaime's path to redemption will be lined with snow (winter is here, people) and no razors, apparently. Yes, fans of the shaggier Jaime from Season 2 can rejoice because Nikolaj Coster-Waldau has confirmed he's sporting a beard in the final season.

"I'm shooting the last season of Thrones. Generally speaking, I'm not crazy-hairy, but I have a full beard. Call me Hairy Styles," the actor told ShortList.

Related Story
'GOT' Star Says the Final Season Is Great
Kayleigh Roberts Contributor Kayleigh Roberts is the weekend editor at Marie Claire, covering celebrity and entertainment news, from actual royals like Kate Middleton and Meghan Markle to Hollywood royalty, like Katie Holmes and Chrissy Teigen.
Advertisement - Continue Reading Below
More From Culture
You Can Now Take a 'Love Is Blind' Vacation
The Best New Music of 2020 (So Far)
Advertisement - Continue Reading Below
Will Hannah Ann Sluss Be the Next 'Bachelorette'?
The 13 Sexiest Movies on Netlfix
'The Bachelor' Has Already Finished His Season
An Investigation Into the Next 'Bachelorette'
This Amazon Reality Show Is a Fashion Girl's Dream
The 25 Sexiest Music Videos of All Time
Who Is 'Bachelor' Contestant Victoria Fuller?
Does 'Bachelor's Madison Prewett Self-Eliminate?