April has been a really good month for the Beyhive. Last week, we were doubly blessed with the midweek drop of Beyoncé's Netflix documentary Homecoming as well as the surprise live album that accompanied it. Homecoming was nothing short of a gift—I feel especially privileged to be able to experience the flawless transition from "Lift Every Voice" straight into "Formation" (her MIND!) every single day—and Beyoncé knew that we were itching for more. Word on the street is was Homecoming is only the first of three major projects in her $60 million deal with Netflix, so who knows what's coming up next?

Well, there is one thing that we should probably stop holding our breaths for: a Formation World Tour DVD.

In an astonishing and truly world class troll, Beyoncé let us know that she has in fact clocked our endless requests/demands for footage from her 2016 tour:

A first look at @Beyonce's 'WHERE IS THE FWT DVD TEE' merch following the premiere of her @netflix #Homecoming documentary. https://t.co/9i6QpGICP6 pic.twitter.com/uY8kIZuYYW

The new merchandise, now available for sale on her website, is a t-shirt with "Where is the FWT?" scribbled all over it in graffiti-style font. It's no doubt a tongue-in-cheek way to let us know that 1) she's heard us and 2) the answer is no. It's not happening, girls.

Beyoncé has a wicked sense of humor, and as a fellow Virgo, I can't help but respect the pettiness, but this kinda stings. The Formation World Tour, in my opinion, was one of her greatest tours ever. The lewks (!), the stage design, the music, the choreography—I feel like we deserve to relive it all over again! I'm tired of watching my shaky iPhone videos from the tour and hearing my screams over the music. The Internet totally agrees.

Beyoncé really released a "Where is the FWT DVD" shirt without giving us the FWT DVD. I- pic.twitter.com/njBJrBJquD

Hive we gotta teach fave a lesson and send Formation to #1 for this. You wanna be petty baby let’s go @Beyonce pic.twitter.com/p213gn5GHg

Beyonce basically said "wHerEs ThE FtW dVd" and was like heres a shirt now gimme $40 for being ungrateful. Queen. pic.twitter.com/5TFXCQ2zhH

Troll or not, we're too loyal too miss out. One in each color, please and thank you.

It might actually be too soon to count out a Formation World Tour film, and Bey could just be trying to throw us off her scent; with two other secret projects coming down the Netflix pipeline, we might very well see that footage being dusted off and available for streaming. The tour might be three years old, but I for one would love to see watch another two straight hours of Beyoncé on Netflix. Beyoncé and chill, if you will.

Watch this space—Beyoncé is coming. 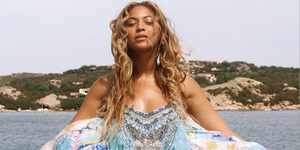 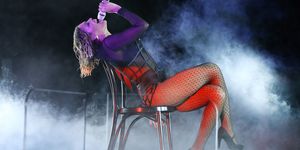 A Visual History of Beyoncé at the Grammys
Ineye Komonibo Ineye (in-NAY-yay) Komonibo is the editorial fellow at MarieClaire.com.
Advertisement - Continue Reading Below
More From Culture
The Best New Music of 2020 (So Far)
Listen Up: Gripping New True Crime Podcasts
Advertisement - Continue Reading Below
'The Bachelor' Has Already Finished His Season
Unmissable Horror Movies Coming Out This Year
Who Is 'Bachelor' Peter's Mom Talking About?
Sarah Coffin Might Be a 'Bachelor' Frontrunner
Who Is 'Bachelor' Contestant Victoria Fuller?
Meet the Star of 'The Bachelor's ChampagneGate
Jurnee Smollett-Bell Is a Real Life Superhero
The Best Love Songs to Ever Exist