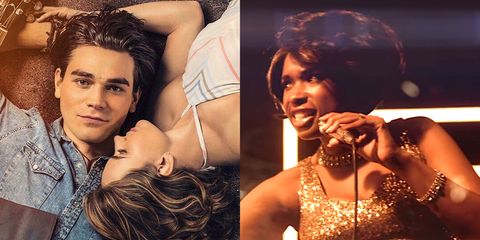 With movies like 2018's Bohemian Rhapsody and 2019's Rocketman, we're in the middle of a truly wonderful time for biopics. But it's more than just that—2020 is looking to be a great year for movies based on real life, from biopics to a straight-up fantasy film that's still absolutely inspired by true events. Regardless of the genre, these films prove that truth really is often much, much stranger than fiction.

From a movie about a French mime who saved thousands of orphaned children from the Nazis in World War II to biopics about music legends like Aretha Franklin and David Bowie, here are some of the best based-on-true-events movies coming out in 2020.

This war drama tells the true story of Vietnam War hero William H. Pitsenbarger (played in the film by Jeremy Irvine), a U.S. Air Force Pararescueman who personally saved more than sixty men, braving situations that many other soldiers refused to in his quest to save his fellow Americans. The movie is told in flashback 32 years after Pitsenbarger's heroic acts in Vietnam, as a Pentagon staffer (played by Sebastian Stan, aka the Winter Solider) seeks testimony from people close to the veteran in response to a request made by his best friend and his parents that Pitsenbarger be awarded the Medal of Honor. The A-list cast also includes William Hurt, Christopher Plummer, Diane Ladd, Samuel L. Jackson, Peter Fonda, and Ed Harris.

Burden tells the story of Mike Burden (Garrett Hedlund), an orphan raised in the Ku Klux Klan who attempts to break away to leave and create a better life with the girl he loves. When the Klan seeks vengeance on Mike, his girlfriend, and her young son, a black Baptist church congregation led by Reverend Kennedy (Forest Whitaker), agree to protect them. Burden premiered at the 2018 Sundance Film Festival and won the U.S. Dramatic Audience Award, but finally comes to theaters this year.

Riverdale fans will be lining up for I Still Believe, starring Archie Andrews himself, KJ Apa as real-life singer-songwriter Jeremy Camp. The film, based on Camp's memoir of the same name, tells the story of his romance with his first wife, Melissa Lynn Henning-Camp (played by Britt Robertson), who was diagnosed with ovarian cancer shortly before their marriage and who passed away four-and-a-half months after they walked down the aisle. Gary Sinise, Shania Twain, and Melissa Roxburgh also appear in the Christian faith-based drama.

Jesse Eisenberg stars in this drama about French actor Marcel Marceau, best known for his mime work as Bip the Clown. Before achieving fame as a performer, Marceau joined the French Resistance and helped save thousands of orphaned children from the Nazis.

This biopic about Sérgio Vieira de Mello, a Brazilian-born UN diplomat, premiered at the Sundance Film Festival on January 28, 2020 and was picked up for distribution by Netflix, with an April drop date on the streaming platform. The film stars Narcos lead Wagner Moura and follows the efforts made to save Vieira de Mello's life when he was trapped under rubble after the 2003 attack at Baghdad's Canal Hotel in Iraq.

In 2018, Freddie Mercury and Queen's story came to the big screen in Bohemian Rhapsody. In 2019, Elton John's life was depicted in the gorgeously surreal Rocketman. In 2020, late rock legend David Bowie's life story comes to the screen in Stardust. The film will primarily focus on Bowie's first visit to the U.S. in 1971 and his creation of his alter ego, Ziggy Stardust, following the trip.

Yes, The One and Only Ivan is a children's fantasy drama film starring a slew of wild and exotic animals voiced by some of the biggest A-list talent in Hollywood today. Yes, it's about a gorilla named Ivan, who lives in a cage at a mall and video arcade and hatches an escape plan with his friends—an elephant named Stella and a dog named Bob—to break loose and learn about their pasts. And yes, it's also, technically, inspired by a true story.

Even though the movie—and the children's novel of the same name on which it's based—are entirely fictional, both were inspired by the true story of a gorilla named Ivan who lived in a similar situation for 27 years before he was finally adopted by Zoo Atlanta in 1994. Sam Rockwell provides the voice of Ivan and he's joined by a roster of living legends (and future legends) including Angelina Jolie, Bryan Cranston, Danny DeVito, Helen Mirren, Ramón Rodríguez, Brooklynn Prince, and the adorable Ariana Greenblatt.

The Trial of the Chicago 7 (September 25)

After a troubled pre-production life that included a temporary shutdown in 2018 to accommodate writer/director Aaron Sorkin's work on his Broadway adaptation of To Kill a Mockingbird, this film is finally slated for release later this year. The Trial of the Chicago 7 will tell the story of the infamous 1969 trial, in which seven defendants were charged with conspiracy, among other things, by the federal government following their involvement in anti-Vietnam War and countercultural protests held in Chicago during the 1968 Democratic National Convention.

Jennifer Hudson stars in this long-awaited and highly-anticipated Aretha Franklin biopic, with which Franklin was personally involved until her death in August 2018. Filming wrapped in February 2020 and the movie stars an amazing cast of talented actors, including Forest Whitaker, Marlon Wayans, Audra McDonald, Mary J. Blige, Tate Donovan, and Tituss Burgess.

Will Smith stars in this biopic about Richard Williams, the father and coach of tennis greats Venus and Serena Williams, and tells the story of how, despite having no prior experience in the sport, he molded his daughters into the legendary players they are today. Jon Bernthal, Aunjanue Ellis, Saniyya Sidney, and Demi Singleton also star.

Kayleigh Roberts Kayleigh Roberts is the weekend editor at Marie Claire, covering celebrity and entertainment news, from actual royals like Kate Middleton and Meghan Markle to Hollywood royalty, like Katie Holmes and Chrissy Teigen.
Advertisement - Continue Reading Below
More From Culture
Jennifer Lawrence Will Star In a Netflix Film
Who From Bachelor Nation Will Be on the 'Games'?
Advertisement - Continue Reading Below
The Best Romantic Films of the Year (So Far)
An Investigation Into the Next 'Bachelorette'
Mindy Kaling & Priyanka Chopra Team Up
How the 'To All the Boys 2' Soundtrack Was Made
Does 'Bachelor's Madison Prewett Self-Eliminate?
How Much Does 'The Bachelor' Make?
Tales of a Hollywood Con Queen
Who Will Be on 'Bachelor in Paradise' in 2020?