Today's Top Stories
1
The Best Red Carpet Looks at the 2021 Emmys
2
These Goats Could Help Save California
3
Tarana Burke on the Past and Future of #MeToo
4
Kate Middleton Shares Prince Louis's First Words
5
Is Olive Oil the Key to Ridiculously Good Skin?
J. AlmasiGetty Images

Fans are unbelievably excited to watch Emma Stone, who's phenomenal and OTT in all the best ways, as a young Cruella de Vil in a new Disney film. The film is apparently in the style of Wicked and Maleficent, giving context and maybe even a little empathy for the seemingly evil character (I have no idea how a puppy-killer is going to get empathy in this case? I mean...her last name is devil!!). When asked how she feels about playing a young version of the iconic character by Entertainment Tonight at the Zombieland: Double Tap premiere, "It's pretty trippy. It's wild," Stone said, and said she often finds herself on set thinking, "This is bananas."

Stone said she was drawing inspiration from the live-action Cruella in 101 Dalmatians in 1996—a.k.a. Glenn Close, who's great at being evil in any context—and the original 1961 animated film One Hundred and One Dalmatians. "I think she's obviously the GOAT," Stone explained of Close and her performance, "but I also have just loved the cartoon for a really long time."

"This comes before [Close's] story," she added. "This leads to her to where she becomes true greatness." So at the very least we know that Stone has some empathy for her own character, much like Close did for hers in Fatal Attraction.

If you remember, there's a now-iconic shot of Stone as Cruella, looking like something out of the Gotham/Batman universe:

And we also got some pics of Stone in costume on set (in a doll-like bright red wig, natch):

Her performance is going to be EPIC. May 28, 2021 cannot come soon enough. 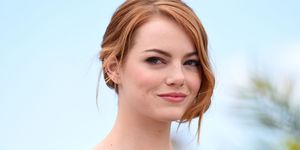 Emma Stone Is Set to Play Cruella de Vil
This content is created and maintained by a third party, and imported onto this page to help users provide their email addresses. You may be able to find more information about this and similar content at piano.io
Advertisement - Continue Reading Below
More From Culture
I'm Obsessed With the Ted Lasso Cast at the Emmys
All the Deets on Michelle's 'Bachelorette' Season
Advertisement - Continue Reading Below
'Bachelor In Paradise' Spoilers: Your 2021 Guide
'Bachelor In Paradise' 2021: Everything We Know
Taraji P. Henson Hints She Might Release Music
Watch the First Bloody Trailer for 'You' Season 3
The "Berries and Cream" Trend on TikTok, Explained
These Goats Could Help Save California
Zoe Kravitz Claps Back at Critic of Her Met Dress
Meghan and Archie Bake a Cake for Harry's Birthday