Today's Top Stories
1
We Should Have Known About J.K. Rowling's Views
2
50+ Beauty Products That Will Change Your Life
3
What's Going on With 'The Bachelorette'?
4
Cute Ankle Boots to Wear Now and Forever
5
The It-Girl Style of the Summer: Goddess Braids
Todd Williamson/NBCGetty Images

This week, at the D23 Expo, Disney revealed a lot of new intel about its upcoming slate of movies and television shows—including a first look at Emma Stone in character as Cruella de Vil.

The Oscar-winning actress is set to star as the iconic villain in Disney's upcoming movie Cruella, which promises to be a Maleficent-style look into the life of Cruella de Vil, the fur coat-obsessed antagonist from 1961's 101 Dalmatians.

In the photo, Emma rocks Cruella de Vil's signature two-tone, black and white hair and holds the leashes of three full-grown Dalmatians. She's flanked by two henchmen in the photo, too, which helps paint a vivid picture of the world of the upcoming film. 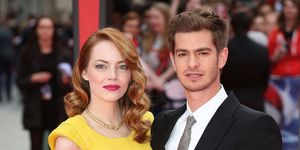 Andrew Garfield and Emma Stone Got High at Disney

We also got to see a couple of behind-the-scenes shots of the new film when it filmed on a busy street in London in September.