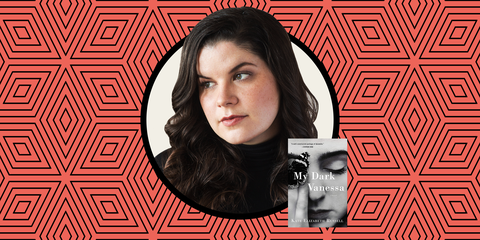 For months leading up to its publication, Kate Elizabeth Russell's debut novel, My Dark Vanessa (March 10, William Morrow), was hailed as Lolita for the #MeToo generation and a must-read for spring. Then it made headlines for other reasons: Another author's essay about the book was interpreted as an accusation of plagiarism. Here, the 35-year-old Wisconsin-based author discusses her title character’s relationship with a much older (and more powerful) man, how the seven-figure book deal changed her life, and the way she’s weathered the varying levels of controversy that have accompanied the lead-up to her novel’s publication.

Marie Claire: You worked on My Dark Vanessa for nearly two decades. When did the project begin?

Kate Elizabeth Russell: I read Lolita at 14 and it broke my mind open. It was the first book I read that I thought, Oh my God, if I could write this way, what would that be like? But at the same time, I was a 14-year-old girl reading Lolita. Of course I saw myself in the book in ways that felt deeply personal. It was a revelation to read the book and think, Maybe a man could see me the way that Humbert sees Dolores. Saying that as a 35-year-old woman, that feels like so cringe-y—but that’s what I thought at the time.

MC: This was around the late nineties?

KER: There were so many examples of this Lolita trope, or the teenage seductress, in our culture. I saw how men my father's age would joke about countdown clocks to when underage celebrity girls turned 18, or how journalists asked Britney Spears about her virginity, like, "Are you really a virgin, Britney? Are your boobs really real?" Adults sexualizing teenage girls was totally normal—but what wasn't as clear to me was how girls were meant to respond to that sexualization.

MC: How did your approach to Vanessa and [high school English teacher] Mr. Strane’s relationship change as you worked on My Dark Vanessa?

KER: I was always trying to walk this line between, "Oh, is this love, is this romantic? Or is it actually something darker?" But as a teenager and even as a young woman, I never would have used the word abusive to describe their relationship. That shift took place over the many years I worked on this novel and my development as a person and as a woman.

There were so many examples of the teenage seductress in he '90s. I saw journalists ask Britney Spears about her virginity.

MC: Were there moments you put your manuscript in a drawer or thought about ditching the project completely?

KER: I was in my early 20s and I sort of expected I'd come out of my MFA program [at Indiana University] and the book would be done and it would be published and my dream would come true—but I didn't have anything resembling a coherent manuscript by the end of that. I felt really frustrated with myself and sort of ashamed. But I never thought about giving up on the story. I'm not sure how to explain it other than I was just so deeply committed to these characters that I couldn't get them out of my head.

MC: The relationship between Strane and Vanessa has elicited a wide variety of reactions. What was feedback like during your writing workshops over the years?

KER: In college, I was in a super nurturing program. I never felt I shouldn't be writing this or that the subject material was frivolous.

During my MFA program, some teachers and classmates didn’t seem to know what to make of my writing because it was such dark stuff, but focused on a teenage girl. I got a lot of feedback to write from the teacher's point of view instead of Vanessa's. At the time I knew that feedback felt wrong, but I didn't have the vocabulary to articulate why.

During my Ph.D. program [at University of Kansas], I had one professor—a woman—who wrote on my manuscript, "This is too difficult to workshop. Please don't submit this again, I don't want to see this again." That was obviously discouraging.

But it was always fairly easy for me to brush all that off because I saw those reactions as an extension of the reactions of a wider imagined readership. And I really was fine with the idea of other people not getting it. The mentality I had from a young age was, I'm doing this for me and no one else.

MC: When you began looking for a literary agent, what was your querying experience like?

KER: It took me five months to get an offer of representation. I kept a really detailed spreadsheet, so I know I sent out 66 queries exactly. But I couldn't have ended up with a better agent [Hillary Jacobson of ICM Partners]. We did one really light revision and then submitted it to editors. It sold within, like, 48 hours. That was the most surreal thing, to go from working on it for so long without much encouragement—certainly not much institutional encouragement—to having it sell so quickly. It felt like whiplash.

MC: And My Dark Vanessa sold for seven figures.

KER: My husband and I were both adjuncting. We were broke and had this scary amount of student debt, the kind you can't let yourself think about because if you do, you start to feel really terrified and hopeless. When my agent called [to say My Dark Vanessa had sold], it changed everything. The financial security that came from this, it's awarding me a future and the dignity of life that I just didn't have before.

The book that I was writing was part of something bigger. It wasn't just about these cartoon villain. It was about how the world could enable them.

MC: Around the time you were querying, #MeToo was in full swing and the themes in your book seemed to perfectly align with the larger cultural moment. Did that change the way you positioned and edited your novel?

KER: When #MeToo started happening—I pinpoint the reporting around Harvey Weinstein in October 2017—I was in the homestretch of writing the final draft. The men who were written about in those early #MeToo stories, especially Harvey Weinstein, were so monstrous and grotesquely horrible, they were abusive and violent in these ways that were just terrifying. It felt so different from what I was writing. The abuse that Strane inflicts on Vanessa is much more like a frog being slowly boiled to death in a pot.

I read an essay about Harvey Weinstein by Jia Tolentino in the New Yorker, and the essay ended with, "You were young and he was powerful. The story writes itself." I wrote that line on a scrap of paper and I hung it by my desk. In a way it was reassuring. The book that I was writing was part of something bigger. It wasn't just about these cartoon villains. It's about the way the world can enable them and encourage harm and the way that someone can demean you and diminish you and hurt you and then get away with it, so long as he has more power than you.

Editor's Note: In January, the conversation around My Dark Vanessa shifted. Gay Mag published an essay by Wendy C. Ortiz about Ortiz's experience writing her 2014 memoir Excavation—which she claims has "eerie story similarities" to MDV—that called out the disparities in her and Russell's advances. The essay gained traction on social media and Russell became the target of plagiarism accusations (which have since been retracted). The above interview took place in December; Marie Claire followed up with Russell on February 21 to discuss what’s happened since.

MC: What have the past few weeks been like for you?

KER: The conversation [around Ortiz’s essay] got really personal and really intense really quickly, as can happen on social media, especially on Twitter. And it became apparent that my presence was not going to be helpful for the conversation and certainly not helpful for my own mental health. So I just removed myself from the situation and let it play out for a bit.

In terms of what the larger conversation was about: writers' experiences of having their work submitted to Big Publishing—it’s a really intimidating and opaque process for writers. So I really support being open and transparent about how that process played out for each of us individually.

But the plagiarism claims about my book were just false. I had been on the record in interviews talking about how long this writing process took, that I started working on this book when I was 16, and I touched on the experiences I'd had as a teenager with older men and how that did inform the writing process, but that very relevant context about my background wasn't making its way into the conversation. And so it became apparent I was going to have to come out and clarify both the amount of time that I spent working on the book and also my personal connection to the material.

MC: And that’s why you felt you had to published a statement on your website, which said My Dark Vanessa was inspired by experiences you had as a teenager?

KER: It was a tough [decision] to put out that statement, both because it brings me personal discomfort, but also I worry about the precedent it sets. I don't want a new normal where, if a fiction writer writes about sexual abuse, he or she is expected to share publicly their own history with abuse just for the right to be able to tell this fictional story.

The idea that we should only be reading stories about abuse by people who have experienced abuse, even if that's well-intentioned, there's real danger of doing harm. It could potentially create an environment where stories end up getting silenced. As a fiction writer, if I'd seen, say, seven years ago—when I was really deep in the writing process but unsure whether my book would ever be published—if I had watched something like this play out, it would have really freaked me out...potentially so much so that I could have thought, Maybe this isn't something that I want to do. And I worry about that. I really do.

The attitude that I'm taking now is that I just want to stay true to myself and to the boundaries I set out at the beginning of the publication process. And hopefully I can show an aspiring writer that it is possible to write about a difficult topic you have a personal connection to and not lay yourself bare. You do not have to. You don't owe that to anyone. You get to decide how much of yourself you want to share.

A version of this story originally appeared in the March 2020 issue of Marie Claire.

Related Stories
The Books That Are Considered Life-Changing
How to Join Marie Claire's Virtual Book Club
This content is created and maintained by a third party, and imported onto this page to help users provide their email addresses. You may be able to find more information about this and similar content at piano.io
Advertisement - Continue Reading Below
More From #ReadWithMC
New True Crime Books You'll Obsess Over
'This Close to Okay' Will Put You in Your Feels
Advertisement - Continue Reading Below
Read 'The Dating Plan' With Us in April
How to Join Marie Claire's Virtual Book Club
Read These Books for Inspiration in 2021
What It Was Like to Write a Book With RBG
25 Great New Memoirs to Add to Your TBR Pile
'Detransition, Baby' Is as Good as Everyone Says
'This Close to Okay' Is Our March Book Club Pick
New Books by Black Authors to Read ASAP