Jennifer Lawrence is finally returning to the big screen—on Netflix, that is. On Wednesday, February 19, news broke that Lawrence is set to star in Adam McKay's Don't Look Up. The comedy is about two scientists who, after discovering that a meteor will strike the Earth, embark on a media tour to warn the world but find it hard to be taken seriously.

In a statement to The Hollywood Reporter, McKay—who you might know from critically-acclaimed projects like Netflix's Dead to Me, HBO's Succession, and the 2018 film, Vice—said he's "thrilled" to be working with Lawrence.

"She's what folks in the 17th century used to call 'a dynamite act.' And the fact that Netflix sees this movie as a worldwide comedy sets the bar high for me and my team in an exciting and motivating way," he added.

The Oscar-winning star had taken a (deserving) two-year hiatus from acting—and threw a gorgeous wedding in the meantime—but has slowly been making her way back to major Hollywood projects.

She recently wrapped up an untitled A24 film, directed by Lila Neugebauer, about a US soldier who suffers a traumatic brain injury while fighting in Afghanistan and finds herself struggling to adjust to life back home.

No word yet on who else will join the Hunger Games star in the film, but with Lawrence aboard and McKay at the helm, expect a big name. The film reportedly will begin shooting in April and will be released later this year.

Related Stories
All The Details on Jennifer Lawrence’s Wedding 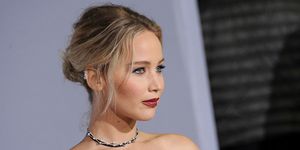 J.Law on the Mysterious Celeb She Hates
This content is created and maintained by a third party, and imported onto this page to help users provide their email addresses. You may be able to find more information about this and similar content at piano.io
Advertisement - Continue Reading Below
More From Celebrity News
Jamie Lynn Spears Talks Maddie's ATV Accident
J.Lo's $100,000 Birkin Is Now Her Gym Bag
Advertisement - Continue Reading Below
Katie Went for Dinner With Emilio and His Dad
Selena Liked Two Bieber Photos on Instagram
The Weeknd's 'Save Your Tears' Lyrics Are Personal
Vanessa Apologizes for Rude Coronavirus Comments
Joe Jonas and Sophie Turner Vacation in Mexico
Can We Please Stop Mommy-Shaming Ashley Graham?
Sophie Turner Shares Her First Date Story With Joe
Uh Oh: Jessica Was Seen Without Her Wedding Ring