Update, October 18: In spite of previous reports that Jennifer Lawrence and Cooke Maroney were already married (see below for more details), it's thought that the couple will marry this weekend. TMZ reports that the wedding will take place in Rhode Island, and that the couple are planning to host about 150 guests. TMZ also got a copy of the menu, which sounds...mouth-wateringly good. Among the items the couple plan to serve to guests: Smoked pork belly with pickled apple, marshmallow s'mores, and wood-roasted fish with herbs and lemon-infused butter. I'm hungry just thinking about it.

Vulture's reporting adds an extra, fun detail: The two will reportedly marry at Belcourt of Newport, an actual castle (it was formerly known as Belcourt Castle) in the region. Vulture reports that the previous owner worked hard to get rid of the dark energies in the castle, and this involved bringing in a shaman to do a special cleansing ceremony. I really and truly now want to get married in a haunted castle, too.

Update, September 26: Ooooh this is so exciting. According to People, Jennifer Lawrence and her mother were just spotted in France ahead of her upcoming wedding to Cooke Maroney! This is so exciting! It's not totally clear when exactly the ceremony is taking place, but there's a weekend coming up. If I had to guess, it'll be within a couple days!

Apparently, Lawrence and her mom are taking in Paris Fashion Week together (sounds like a perfect mother-daughter date right there), and a source says, "She’s getting really excited about the wedding." Said source also explained that the courthouse adventure, see below, was to obtain a marriage license. I'm not sure why they needed a photographer, then? But honestly, these details are adorable. So far, no sign of Maroney, but he may be able to keep a lower profile because he's not, you know, a film star.

Lawrence also revealed her entire wedding registry with Maroney on Amazon.com (including a robot mop and a weighted blanket, natch). "Planning a wedding is so exciting, but it can be overwhelming," Lawrence explained. "For anyone else needing a little inspiration, I thought it would be fun to collaborate with Amazon to share a few of my favorite registry wish-list items. It's so easy, and you can find everything you need all in one place."

Update, September 17: Wait, what now?? According to Page Six, Lawrence, Maroney, security, a photographer, and a friend were all spotted at New York's marriage bureau on Monday. So they may actually be officially married already! They are planning a larger event in October, so this is very much giving me Sophie Turner-Joe Jonas vibes (remember when they got real-married by an Elvis impersonator in Vegas? Memories.). This may also make sense, considering that sometimes the big blowout event is not the legally binding event.

Lawrence and Maroney are very private about their relationship, but Lawrence did open up recently to The Cut, saying, "He’s my best friend so I want to legally bind him to me forever. And fortunately the paperwork exists for such a thing. It’s the greatest...You find your favorite person in the planet and you’re like, you can’t leave. So I wanted to take that offer."

Update, February 5: Jennifer Lawrence is engaged to Cooke Maroney, per People, who confirmed the news with Lawrence's spokesperson. A source told Page Six that Lawrence has been wearing an engagement ring: "It was a giant rock. They seemed like they were celebrating and people were talking about it. The ring was very noticeable." She's also been sharing the news with her family and friends, the two outlets reported.

Original post: Jennifer Lawrence has stepped away from high-profile relationships. After Nicholas Hoult, Chris Martin, and Darren Aronofsky—all of whom the star remains friends with—she's recently been spotted with someone who hasn't been in the spotlight very much: Lawrence's reported boyfriend Cooke Maroney. While they haven't made their red carpet debut, and the couple remains tight-lipped about their relationship, we do know a few things about Lawrence's new guy.

Maroney is based in New York City, which is where he and Lawrence have usually been spotted. He's a director for the well-known Gladstone 64 gallery on the Upper East Side, which represents high-profile artists like Anish Kapoor, and he used to work for the famous Gagosian gallery.

There aren't many photos of him, but he's known to attend big-name art events, like the Museo Jumex Opening After Party in November 2013. Maroney's seen here (right) with socialite Stavros Niarchos.

And here he is again:

He understands the market.

In 2015, in an inteview with Artsy, he explained how the modern art market is evolving. "In the art world, the way information is shared is rapidly changing," he said. "A growing group of internet-savvy collectors are searching for art online with galleries eager to provide it."

A source told The Cut in June 2018: "I think he really has solid taste in art and he’s a very good art dealer, and I expect a fruitful career out of him."

He's from the Northeast.

According to Metro US, he hails from Vermont (he went to high school in Middlebury) and went to NYU for college. His parents reportedly own a farm in his home state and prefer the quiet life. They're the "third organic dairy in Vermont and arguably the biggest."

He hasn't been in the spotlight.

Apart from an occasional art show or event, Maroney has been pretty quiet and less well-known. He does have an Instagram, but it's private. Sources have apparently described him as "an all-around good guy and a nice guy.”

The couple was first spotted in June.

At that point, the couple had been dating a couple weeks, introduced by Lawrence's BFF Laura Simpson. "Cooke plays very coy when speaking about her to his friends and colleagues,” a source told Us Weekly. “He is clearly smitten about her.”

A source told Page Six: "They have been very private and careful not to be seen together."

Whenever Lawrence and Maroney are spotted, it's usually out walking, en route to dinner, or even food shopping. Stars, just like us! They also made a short trip to Paris in August, according to People, and “seemed happy, occasionally holding hands” while mostly out walking.

He has joined Lawrence at an event.

The pair attended a premiere of The Favourite, according to Us Weekly, and go figure: Two of Lawrence's exes, Hoult (who stars in the movie) and Aronofsky were there.

They've reportedly moved in together.

In January, a source told Us Weekly that the couple was getting super-serious. "They definitely appear to be in it for the long haul." 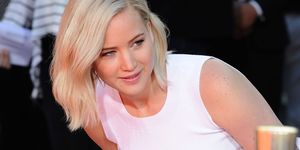 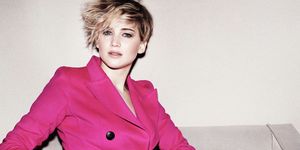 Are Jennifer Lawrence and Chris Martin Back On?
Katherine J Igoe Katherine’s a Boston-based contributing editor at Marie Claire online who covers celebrity, fashion, entertainment, and lifestyle—from “The Bachelor” to Everlane to Meghan Markle.
This content is created and maintained by a third party, and imported onto this page to help users provide their email addresses. You may be able to find more information about this and similar content at piano.io
Advertisement - Continue Reading Below
More From Celebrity
William's Private Secretary Quits After 10 Months
A Look at Royal Family Portraits Through the Years
Advertisement - Continue Reading Below
40 Celebrity Sisters Who Look So Much Alike
The Best TV and Movie Wedding Dresses of All Time
40 Rare Photos of Grace Kelly Through the Years
The 50 Most Popular Episodes of ‘Friends,’ Ranked