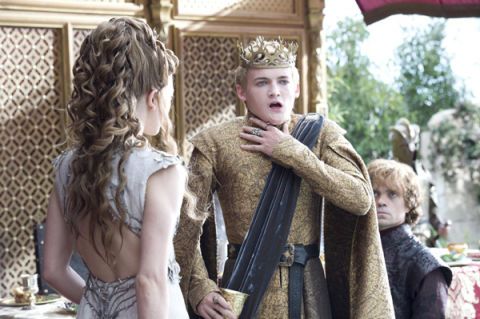 Non-GOT fanatics don't understand why we would devote a precious hour of our weeks to watching a show that regularly depicts incest, rape, and some pretty graphic torture scenes. It can be a difficult-to-stomach show where truly anything goes, but certain plot twists have made it impossible to leave behind. Here are the seven moments that will convert you into a bonafide GOT lover.

This event, which happens in the pilot, shows us why we shouldn't trust the Lannisters. Jaime intends to kill Bran by shoving him out of a tower because he witnessed Jaime and Cersei (brother and sister) sleeping together. Luckily, Bran lives, but is paralyzed. This scene introduces you to Jaime and Cersei's twisted relationship and shows you what can happen when you're in the wrong place at the wrong time, even innocently.

When these frozen zombie creatures are first presented to us, we wonder if this is the reason why everyone fears that an endless winter is coming. Still towards the end of season 4, they are a bit of a mystery to us and we're anxiously waiting (and fearing) their future impact.

Eddard Starks' death towards the end of season 1 is when we experienced that "there's no turning back now" moment and felt ourselves becoming superfans. From the onset of the series, you are predisposed to love the Starks and hate (most) of the Lannisters, especially Joffrey, so Eddard's murder forces you to become invested. Eddard confesses to treason under the impression that he will be exiled and allowed to join the Night's Watch, but Joffrey shocks everyone by executing him. GOT is a story of good vs. evil, and after this event, you desperately want to see good prevail.

4. The Battle at Blackwater Bay

If you didn't love Tyrion before, now you absolutely are rooting for this Lannister. He exhibits true bravery and a genuine desire to defend the family that has treated him so poorly while his king takes shelter inside the castle. And of course, the recognition for the victory goes to King Joffrey, who did nothing to lead his army. While you kind of want to see the Lannisters go down in this battle, you're still rooting for Tyrion and happy that he had his moment, even if it's not recognized.

Dany ends her search for an army in Astapor, where she purchases the entire Unsullied army and reminds the city that a dragon is not a slave. She takes power of the city and liberates its people in the most epic way possible. It's hard to stop yourself from cheering the first time you see this scene. This moment transforms Dany into a true force to be reckoned with and a contender for the Iron throne.

Reactions to the Red Wedding were varied, but one thing that everyone undoubtedly felt was shock. Seeing three major characters get wiped out in a matter of minutes was jarring and reminded fans that no characters are off limits. After this, we wonder how Westeros will fare without Robb Stark, and even though we are upset, we can't stop watching. We're committed to seeing their deaths avenged.

The purple wedding was one of the few Game of Thrones events where you feel like justice has been served. King Joffrey is poisoned and the viewer is momentarily thrilled, until you realize the storm of events this sets off for Tyrion, who is accused of the murder. Before we find out who was responsible for this later on in the season, we couldn't stop ourselves from watching this scene over and over, looking to see who came in contact with the wine and the pie that brought the vicious king down. One thing we never counted on was seeing Joffrey's reign end, so this moment was beyond satisfying.

The Best Braids in Game of Thrones