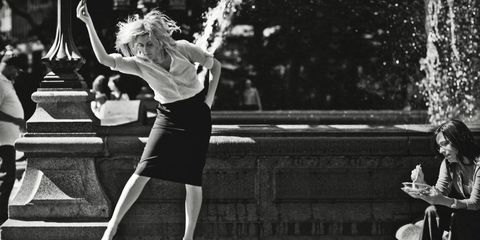 It was the best of times, it was the worst of times—A Tale of Two Cities but also how you'd probably describe your 20s. And it seems, like pretty much everything on the planet, youth and love and spontaneity come at a price: what most would call the quarter-life crisis. Post-college, pre-pretty much everything else, you're still figuring out what the hell you're doing with your life. While they may not help, these movies at least make you feel like someone else gets it, which we guess is something.

Kristen Wiig plays a once promising playwright who, after being left by her boyfriend and getting fired from her magazine job, stages a suicide attempt to get attention—except, she finds herself at home in the Jersey Shore with her estranged mother and her "CIA" boyfriend, weirdo brother, and a 20something boarder who now occupies her room and performs in a Backstreet Boys cover band.

After one of their college friends commits suicide, a few (now) strangers come together to figure out what went wrong and what happened to them along the way. Are they better off now? It's debatable.

Like The Big Chill for millennials (sorry, I hate that word, too), a college friend attempts suicide which leads a group of late 20s friends (and one counseling, 22-year-old girlfriend) to shack up for a weekend in order to make sure he doesn't attempt it again. Little do they know that seeing each other will release old emotions and draw out new ones. But perhaps the biggest takeaway is the idea that things left unsaid and done in the past should often just stay there.

Lola is dumped just three weeks before her wedding. With her 30th birthday coming up, she begins to rethink how she approaches relationships and how she deals with her friends—you know, all that growing up stuff that sucks to do but, ultimately, is the best for you.

Another Greta Gerwig film (STOP BEING SO GOOD AT THIS, GRETA), Frances Ha examines a woman who is a not-so-great dancer, trying to figure out where she's going to live (and who she's going to date) now that her best friend/partner in life wants to move to her favorite neighborhood—a neighborhood Frances obviously can't afford. Without being the usual "oh, woe is me" 20something film, it hits the nail on the head of being charming, funny, and at moments, too real.

Like Frances Ha, Walking and Talking deals with the evolving of the friendship between two women as one moves out to live with her fiancé (Laura) and one who suddenly feels left behind (Amelia). What makes it so relatable is nothing feels staged into overdramatic or black-and-white characterizations—Amelia's ex-boyfriend is nice and comforting, with both of them yearning to make something work that just won't, while her next romance with "the ugly guy" (as she calls him) is like any other—fraught with questions and awkwardness and coping. Basically...it's life.

A recent divorcee moves back in with her parents and the only person she finds herself connecting with is a 19-year-old neighbor. Somehow avoiding the "is this appropriate?" question by being more of a look at relationships and how one feels about his or herself, it's an interesting take on what makes someone appealing, what that means for other people, and just why you need to figure that out for yourself.

For one, this movie is a revelation in a world of lackluster romantic comedies. But it's more than that—a look at what a 20something woman actually deals with in her life and the strange ways we all make sense of what happens to us (laughing is better than crying, as they say), the movie somehow makes an abortion the root of a working rom-com, but without banging you over the head with an agenda. It's just so good. P.S. One of the best parts has to be her making up rules to stalk her ex-boyfriend. ("After one three sips, I will leave. If that woman crosses the street on the next sip, I will leave.")

A college-aged woman wants to be a poet and seeks out the approval of her reclusive yet famous professor—all while working at an adult book store to make ends meet. This movie is all about how failure makes you who you are, even if it sucks while it's happening.

A man finds his wife sleeping with another man on their twin daughters' fifth birthday. She's a villain, right? Wrong. Just like everything, nothing is as it seems—and he, as a graphic novelist, makes sense of all of his feelings by drawing them. But will he ever figure out how to move on? FEELS.