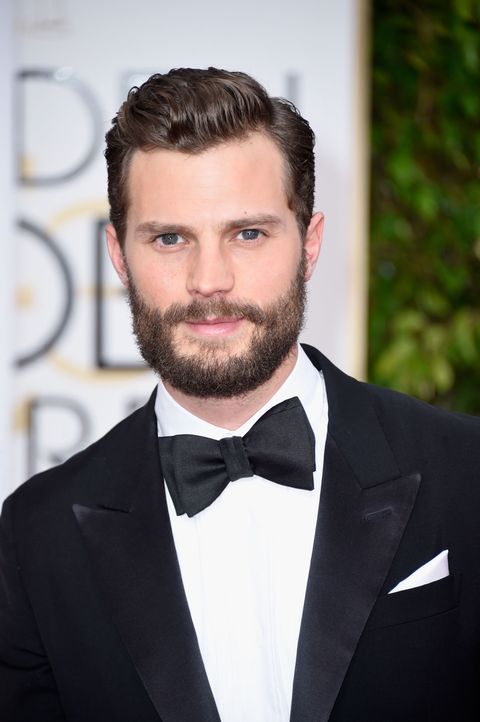 Update, 2/25: Breathe in, breathe out. Jamie Dornan isn't going anywhere. "All press reports are pure conjecture as the studio has not committed to a sequel as yet," his rep tells E! News, which sounds like PR-person speak for "he's contractually obligated to stay for Fifty Shades 45: Anastasia's Granddaughter's Revenge, but please God, let E L prove so difficult Universal scraps the whole thing."

Update, 2/24: Jamie Dornan won't be back for Fifty Shades Round Two, the Mirror reports. Amelia Warner, Dornan's wife and the mother of their 15-month-old daughter, would rather not have her husband become a sex symbol random 33-year-old women in movie theaters masturbate to, while Christian Grey himself is allegedly disappointed his career hasn't taken off quite the way he had hoped. And there's that thing again about him and Dakota Johnson not getting along, which the Mirror's source confirmed, saying, "Jamie does not think his performance was bad—instead he blames Dakota and says it wasn't possible to have chemistry with her."

You know what? That's OK. If the sequels don't pan out, they could always channel all that drama into a reality series. Fed Up with Fifty Shades—we can see it now.

Original post: Sounds like making Fifty Shades of Grey really did cost Sam Taylor-Johnson her sanity. According to Mirror UK, the director clashed too much with author E.L. James to want to work together again, and is threatening to leave the production for good. "Sam won't be back for the Fifty Shades sequels. She wants out and Universal knows that's the right decision," a source told the publication.

"Her relationship with Erika has become toxic. They despise each other and blame each other for the problems with the film."

Apparently, things were not quite as steamy as James wanted them to be. "All the biggest arguments were about the sex scenes in the film. Erika wanted the movie to be loyal to the book and much more explicit." Taylor-Johnson, on the other hand, disagreed: she was on a mission to create "more than just a collection of S&M scenes," the source added.

The tension between the director and author hasn't been a secret—Taylor-Johnson herself told Porter magazine, "We definitely fought—but they were creative fights and we would resolve them." Her reps so far deny that she hasn't signed on to direct the next sequels, mainly because the two films haven't been confirmed.

But seeing as the film was one of the top-rated movies ever to debut in February, the highest-grossing Presidents Day holiday opener of all time, and is among the biggest R-rated debuts in history, it's safe to assume this isn't the last we've seen of Grey's playroom. Or Taylor-Johnson's Fifty Shades paychecks.