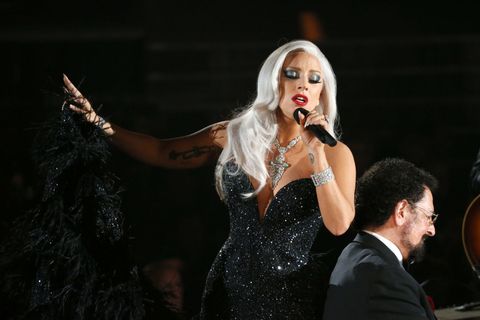 Following the Oscars there was but one name on everyone's lips: Lady Gaga. Her performance tribute to The Sound of Music had our jaws on the floor, serving as a reminder to many that behind all the smoke and mirrors, Gaga's got some pipes.

Today, her raw talent has been put on display yet again in the form of a leaked track with a powerful message. Entitled "Til It Happens To You," the ballad was written for the soundtrack of a documentary called The Hunting Ground, which studies the lives of young people affected by rape. As a victim herself, it's a cause that's close to Gaga, who's recently opened up about her past experience with a record producer.

"I don't want to be defined by it," she explained on The Howard Stern Show. "I'll be damned if somebody is going to say that every creatively intelligent thing that I ever did is all boiled down to one d**khead that did that to me."
The track itself, which she collaborated on with Grammy-winning songwriter Diane Warren, is robust and orchestral with lyrics that command attention: Till It happens to you, you don't know how it feels, how it feels/ Until it happens to you, you won't know, it won't be real/ No it won't be real, I know how it feels.
This content is imported from YouTube. You may be able to find the same content in another format, or you may be able to find more information, at their web site.

It's not the first time Gaga has addressed the heavy subject matter in her music—her song "Swine," which she performed at last years' SXSW music festival, is an upbeat, yet angry account of her experience.

"The song is about rape," Gaga said. "The song is about demoralization. The song is about rage and fury and passion and I had a lot of pain that I wanted to release and I said to myself, 'I want to sing this song while I'm ripping hard on a drum kit and then I want to get on a mechanical bull, which is probably one of the most demoralizing things that you can put a female on in her underwear, and I want this chick to throw up on me in front of the world so that I can tell them 'You know what, you can never ever degrade me as much as I could degrade myself and look how beautiful it is when I do.'"

Between her Cheek to Cheek jazz collaboration with Tony Bennett, that Oscars performance, and this latest project, we can't help but think this marks the beginning of a new chapter for Gaga and we're ALL ears.

Lady Gaga Knocks Her 'Sound of Music' Tribute Out of the PARK, Blows Everyone Away