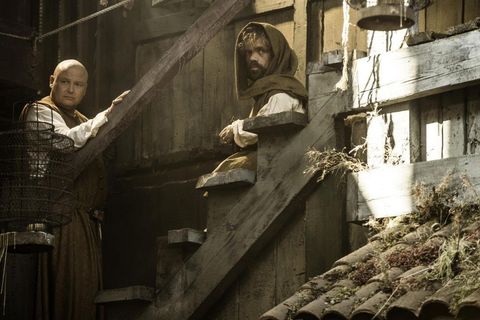 Today, Apple hosted an event primarily to introduce the new Apple Watch, but it proved be quite a fête for Game of Thrones fans.

For one, Apple CEO Tim Cook and HBO chairman/CEO Richard Pleper announced that the two companies would be partnering up, with Apple TV serving as the exclusive streaming hub for HBO Now content. HBO Now is a new service that will offer access to its entire library of original shows and large selection of films for $14.99. Naturally, it's a dream come true for GoT fans without cable.

As if that's not exciting enough, during the event they debuted a *new* trailer for the upcoming season, which finally gives us a good look on what's going on with Tyrion Lannister. Spoiler: He's grown a beard and it's giving us all the feels.

Game of Thrones Season 5 will premiere on HBO on April 12th. Remember: Thanks to this new announcement, if you have an Apple TV you'll be able to watch it, ahem, legally without cable so long as you (or the host of your GoT viewing party) subscribe to HBO Now for $15. Who wants to go halfsies?

Watch the latest trailer, below:

'Game of Thrones' Bloopers Are the Best Kind of Bloopers

Sansa Stark: 'Game of Thrones' Season 5 Will Be Like the Red Wedding, Only Worse

The Original Plot for 'Game of Thrones,' as Told By George R.R. Martin, Has Been Leaked Online

Lauren Valenti Associate Web Editor I’m the associate web editor at Marie Claire.
This content is created and maintained by a third party, and imported onto this page to help users provide their email addresses. You may be able to find more information about this and similar content at piano.io
Advertisement - Continue Reading Below
More From Culture
Who's Who in Netflix's 'Emily in Paris'
The Privacy Whisperers
Advertisement - Continue Reading Below
Take Our Quiz to Find Out How Safe Your Info Is
The Best Serial Killer Movies Ever Made
What to Know About Tayshia's 'Bachelorette' Cast
Tara Palmeri on Hosting a Podcast for Survivors
It's Been a Weird Year for 'The Bachelorette'
Clare Crawley's 'Bachelorette' Cast Is Out
Honor RBG With These Books & Movies
Sad Movies for When You Need a Good Cry