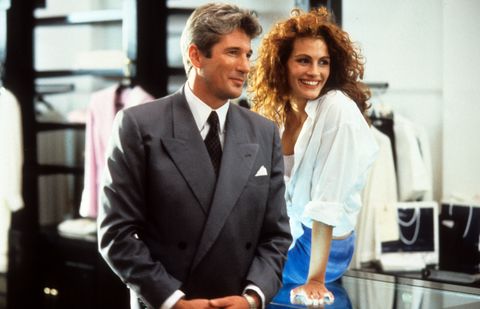 You know when the movie heroine is wronged in some way and then gets the kind of epic vindication that only Hollywood can provide? And how cathartic that is even when you're on the couch in your much-maligned sweatpants? Yeah—in honor of Mondays generally sucking, we've rounded up five of the most satisfying comebacks. Take that, work week.

Who can forget this pivotal scene? It's generally what we all act out in our shopping fantasies. After a salesperson denies Vivian the chance to shop for a special night out with Edward (because, you know, she's still wearing her hooker boots and even though she's loaded with cash the salesperson is a snob), Vivian comes back after a post-shopping makeover with bags and bags of stuff. "You people work on commission, right?" "Yeah," the confused and already embarrassed salesperson says. "Big mistake. Big. Huge. I have to go shopping now." Then she leaves! IN YOUR FACE, SNOBBY MCSNOBERSON. (That, right there, is why I will never have a comeback moment like this one.)

This is essentially the Pretty Woman scene but is even better for a couple of reasons: 1) It's based on real life 2) See point one. No but seriously, Selena Quintanilla was THE Latina crossover artist that had everyone groovin' to Tejano and singing "Como la Flor" like they knew what it meant. And it was kind of amazing to see an act of prejudice against a community turned on its head. It feels as fresh today as it did in 1995. You know, when the movie was made. (Crazy, right?)

Romy and Michele's High School Reunion is one of those movies that you will never tire of, mostly because it fulfills every misfit's dream of telling off those who made them feel inferior. When the duo forgo their whole we're-successful-businesswomen bit in favor of just being themselves, they have the most satisfying comeback moment that makes us all smile. "What the hell is your problem, Christie? Why the hell are you always such a nasty bitch? I mean, okay, so Michele and I did make up some stupid lie! We only did it because we wanted you to treat us like human beings. But you know what I realized? I don't care if you like us, 'cause we don't like you. You're a bad person with an ugly heart, and we don't give a flying fuck what you think!"

After Elle Woods gets into Harvard Law to try to win back her ex-boyfriend Warner, only to realize he's engaged to another girl (Vivian), Woods has to buckle down and get serious about her studies—and the moment she puts Vivian and Warner in their places by winning an argument in class is pure, unadulterated Karmic pleasure.

This is more a slow, satisfying build that culminates in the perfect tell-off. When a compassionate girl becomes the school "slut" because of a lie that spirals out of control, she lets her whole school in on the charade by having them tune in to a racy video chat that ends up being a tirade against slut-shaming and popularity. Riiiight up our alley.

The 10 Most Romantic On-Screen Kisses

8 Movies That Made Us Rethink Women and Sex