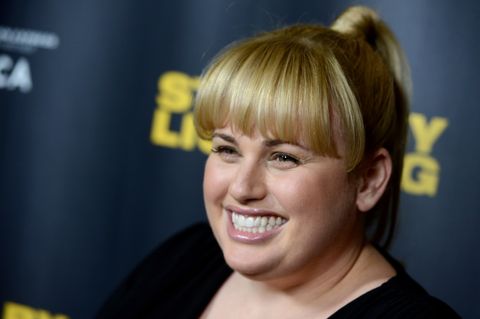 Rebel Wilson is comedy exemplified. The 29-year-old actress is known for the impeccable timing and improv skills she seems to bring to every character she plays (Fat Amy, Brynn, Tilly, let's not forget that time she played a zealous Insane Clown Posse fan named "Big Money Hustla" on Workaholics...)

But it hasn't been all fun and games for the performer.

"How I see it is, I do two types of job: dream jobs like female-driven comedies and the other job which is basically the boys' club," she told Elle UK. "I have done three big movies with men – these are talented, strong-minded males, but you have to find a way to work that system. You aren't being paid much and you start at a disadvantage with the script. Usually, you don't have any cool jokes and you're there to support the male actor. Those male roles are 90% written and formed by the time the filming starts but the female roles are only 20% there."

Showing we still have a long way to go before comedic roles for women are seen as the "norm" (and not brought up in every interview, ever...as if funny women is a NOVEL idea and totally new...), Wilson makes the limitations work for her.

"It's unfair, but I love being funny so I improve the role, work with the limited parameters and opportunities and maximize them."

10 Rebel Wilson One-Liners That Made Us Die Laughing