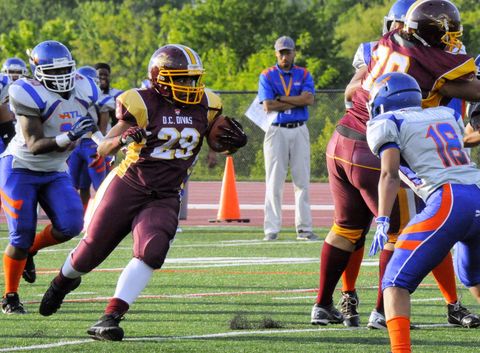 Allyson Hamlin spends most of her time as a detective in Washington D.C.'s police department—but she'd rather be in a football uniform. The 38-year-old Maryland native has spent 11 years playing with the Women Football Association's D.C. Divas, a team made up of equally fierce women, and she's now—proudly—their quarterback.

"People have a very difficult time seeing women as being strong and powerful and feminine," Hamlin says of being a woman in a sport that's so steeped in bro-culture. "The assumption is, 'Oh it's this grueling bravado sport, it must be a bunch of butch women going out there who want to be men.' I just think that's what people envision. Until they actually come out and see us, that skepticism is going to stay. It's just going to take time."

Football continues to be a massively male-dominated sport, and while NFL players typically rake in millions per year, women in the WFA aren't compensated—at all. Mind-blowingly huge gender bias aside, at this point, Hamlin just wants the Divas to be taken as seriously as their high-roller friends in the NFL.

"I think football brings out a side in a lot of the women that they've never seen before."

"One of the biggest compliments we've ever had is 'You'd never know you're women until you take your helmet off,'" she says. "To me that's what it's all about, because it means we're doing the sport right. As sexist as society is, it's evolving. If you're a true sports fan you appreciate a good product, no matter who's playing it and no matter what sport it is. I know the D.C. Divas are doing it right, there are a lot of other teams that are doing it right. If we continue to do it right, eventually you have to acknowledge us."

Hamlin and her teammates—CEOs, teachers, business analysts—are the subjects of a new documentary, (amazingly) titled Women with Balls. The independently produced film, which is currently running an indiegogo fundraising campaign, will follow the players through their 2015 season, tracking their highs and lows as they battle their way to the 2015 WFA championship.

Like most sports documentaries, Women with Balls will be heavy on the inspiration and empowerment—but these themes are finally being viewed through a female lens. "We're more cerebral, we're more emotional, we need to talk everything out, we need to put everything on the table," Hamlin says. "So you really get a lot more raw emotion. I think football brings out a side in a lot of the women that they've never seen before. The bond is incredible—the team is like a second family to all of us."

Head over here to contribute, because this is a story that deserves to be told.

The 8 Greatest Moments for Women in Sports

This content is created and maintained by a third party, and imported onto this page to help users provide their email addresses. You may be able to find more information about this and similar content at piano.io
Advertisement - Continue Reading Below
More From Culture
Bethenny Frankel Is Minding Her Own Business
A Look Back at Princess Anne's Life in Photos
Advertisement - Continue Reading Below
Historical Films to Stream If You Loved 'Hamilton'
The Top-Grossing Book-to-Movie Adaptations
Is Jack From 'The Circle' Cousin Greg?
Cristin Milioti & Billy Magnussen Play Trivia
The Most Unmissable Movies of 2021 (So Far)
Mother's Day Gifts to Show How Much You Miss Her
Get to Know Delessa From 'The Circle'
Movies That Just Feel Like Summer