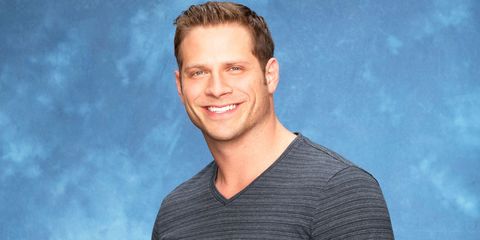 The Bachelorette, clearly the last bastion of feminism, has really picked some awesome contestants this season. (That's all sarcasm, folks.) If you missed this season's twist/premiere, it went down a little something like this—two girls (unbeknownst to them) were chosen to be this year's Bachelorette. Then, people got to vote one off. As if that wasn't fun enough, we also got to meet a guy who makes rape jokes.

Yes, for real. Ryan McDill, now forever known as Drunk Ryan, made quite the intro to America on the season premiere when he got plastered and proceeded to make ridiculous comments. At one point, he took off his clothes and asked if this was the "Gay Bachelor" before asking another contestant, "Why am I not raping you right now?"

To be fair, producers/AKA the Bachelor God Chris Harrison kicked him off immediately following (he didn't even get to do the rose ceremony), but he's back on everyone's radar now that he's actually defending his comments. Yep, the "comedian" (as he calls himself) tells TMZ, "I wasn't blacked out and knew exactly what I was doing."

He says the rape line actually wasn't a joke, but rather a way of saying he'd destroy/beat out the other contestant. (Cool, rape as everyday language that doesn't technically mean rape! Yes, that's exactly what we as a society need!)

He continued, "People need to get off their high horse. It was awesome and entertaining."

Apparently, someone needs to get McDill a dictionary so he can learn the definitions of "awesome," "entertaining," and most importantly, "rape." Fast.