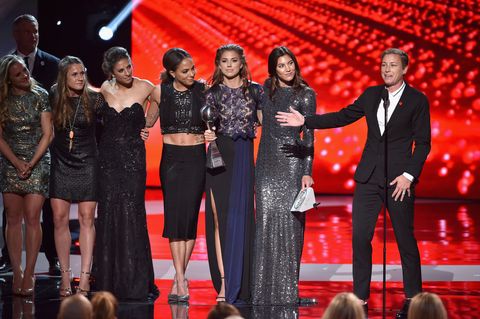 Caitlyn Jenner wasn't the only woman to take over the ESPY Awards last night. The entire awards show put a much-needed spotlight on female athletes, who often get overshadowed by men's sports. These women showed strength, grace, humor, and inspired us all. Here, six times we teared up and cheered along with everyone.

UFC fighter Ronda Rousey took home the night's award for Best Fighter, beating boxer Floyd Mayweather. And when she accepted it on the red carpet, she slammed him for his record of domestic violence. "I wonder how Floyd feels being beaten by a woman for once," she said. "I'd like to see him pretend not to know who I am now." She was reportedly talking about a past interview when Mayweather was asked about Rousey, and he responded, "I don't know who he is." Yup, really, he said that.

Mo'ne Davis was a girl on the rise.

Teen baseball phenomenon Mo'ne Davis, who absolutely killed it at the Little League World Series, took home the award for Best Breakthrough Athlete. She beat a dude-heavy roster of nominees: Ohio State quarterback Cardale Jones, golfer Jordan Spieth, and NFL wide receiver Odell Beckham Jr. And did we mention she's just 14? It looks like she'll have way more trophies to add to her collection in the future.

After winning the Women's World Cup, Team USA has been everywhere lately. (Even a Taylor Swift concert.) And it makes total sense that they won Best Team, beating the New England Patriots, Connecticut Huskies, Golden State Warriors, Chicago Blackhawks, and Ohio State Buckeyes. Superstar Abby Wambach accepted on behalf of the team. "We did this for America and our fans," she said, "and I'm so happy that I have these girls to celebrate this with."

The night remembered an athlete gone too soon.

Lauren Hill was a promising college basketball player when she was diagnosed with brain cancer that ended up taking her life. But before she succumbed to the disease, she was able to fulfill her college sports dream, and the country rallied around her. She won the Best Moment Award, and her parents accepted it in a tearful speech on her behalf. "No matter what, it is possible to achieve your dreams," her mother said.

An incredible veteran made us proud and patriotic.

Danielle Green accepted this year's Pat Tillman Award after a video narrated by Jessica Alba. While serving in the army, Green severely injured her arm and had to have it amputated. But now, she's working to help other veterans in need. "If my story leaves you with one thing tonight, I hope it leaves you with a challenge," she said. "Ask yourself: What's my purpose? What's my passion? What do I want my legacy to be? How can I live as a full human being?"

Caitlyn Jenner brought the house down.

Caitlyn Jenner needs no introduction. Her transition has been public, graceful, and stunning to see. And when she accepted the Arthur Ashe Courage Award, it was no different. In her emotional speech, she explained that she wants to use her spotlight to help other transgender people who don't have the support she does. "I'm here to promote a very simple idea: Accepting people for who they are," she said. "Accepting people's differences. My plea to you tonight is to join me." There wasn't a dry eye in the house.