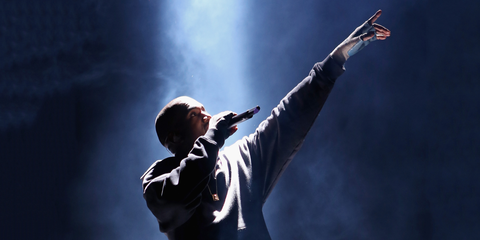 When pop stars reach a certain level of stardom, they don't have to worry about teasing their music. They can just drop it out of thin air à la Beyoncé and watch their new material rise to the top of the charts (if they're lucky). So needless to say, we were hardly shocked when Kanye West, a self-proclaimed god/possible 2020 POTUS, spontaneously uploaded two new songs to his SoundCloud yesterday afternoon as if it were NBD.

The tracks are both remixes of previously released material, including "When I See it" (as a remake of "Tell Your Friends") which features a groovy retro beat he produced for the The Weeknd, along with "Say You Will," a haunting remix featuring Caroline Shaw, a Pulitzer Prize-winning musician (violinist, singer, and composer FYI) who was featured on his album 808s & Heartbreak back in 2008.

The new singles below will appear on Yeezy's forthcoming album Swish, which has no release date as of yet. And let's face it—at this rate, it probably never will, since West and his genius impulses wouldn't allow for such a square formality.