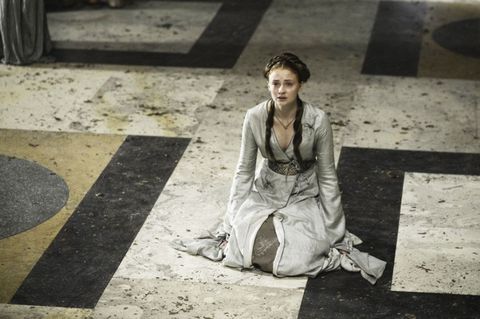 Game of Thrones has always been gratuitous when it comes to sex and violence, citing realism as justification. But Sansa's rape scene crossed the line for many viewers, and their concern struck a chord with the show's producers.

"We were aware ahead of time that it was going to be disturbing but but we did not expect there would be people in Congress talking about it," Game of Thrones director Jeremy Podeswa said during a briefing at Fox Studios in Australia. "It was a difficult and brutal scene and we knew it was going to be challenging for the audience."

While Podeswa maintains that they tried to handle the scene sensitively (er, okay...), he says GOT producers Dan Weiss and David Benioff have changed their approach to Season 6.

"[They] were responsive to the discussion and there were a couple of things that changed as a result," he said. "The show depicts a brutal world where horrible things happen. They did not want to be too overly influenced by [criticism] but they did absorb and take it in and it did influence them in a way."

Depictions of sex and violence on a network like HBO shouldn't be a deal breaker, but depictions of sexual violence can easily cross the line into sensationalistic, exploitative and even irresponsible. Hopefully, Game of Thrones' upcoming season will consider the issue more thoughtfully.

Mehera Bonner Contributor Mehera Bonner is a news writer who focuses on celebrities and royals—follow her on Instagram.
This content is created and maintained by a third party, and imported onto this page to help users provide their email addresses. You may be able to find more information about this and similar content at piano.io
Advertisement - Continue Reading Below
More From Culture
'You' Season 3 Is Adding a Menacing Character
'Fate: The Winx Saga' Season 2: Everything We Know
Advertisement - Continue Reading Below
Who Is Michelle Young on 'The Bachelor'?
Who Is the Voice on the Radio in 'WandaVision'?
Everything We Know About Matt James
How to Join Marie Claire's Virtual Book Club
Watch UCLA Gymnast Nia Dennis' Epic Floor Routine
Fans React to 'Euphoria' Special 'Part Two: Jules'
'Detransition, Baby' Is Our Feb Book Club Pick
'The Bachelor' Is Back!