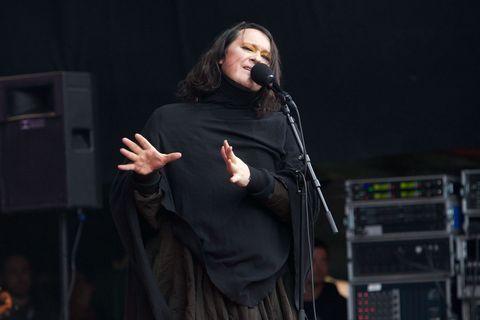 Visual artist Anohni is the first transgender performer to be nominated for an Oscar, but she won't be attending the ceremony. The "Manta Ray" singer is in the same category as big name vocalists like Sam Smith, Lady Gaga, and the Weeknd, who are performing during the broadcast. And while you'd think the Academy would jump at the chance to celebrate such an important moment in trans history (especially since The Oscars is a diversity fail in every other way), Anohni's performance was ruled out due to "time constraints."

"I was in Asia when I found out the news," the singer writes in an essay for Pitchfork. "I rushed home to prepare something, in case the music nominees would be asked to perform. Everyone was calling with excited congratulations. A week later, Sam Smith, Lady Gaga, and the Weeknd were rolled out as the evening's entertainment with more performers 'soon to be announced.' Confused, I sat and waited. Would someone be in touch? But as time bore on I heard nothing...The producers seemed to have decided to stage performances only by the singers who were deemed commercially viable."

Anohni points out that Dave Grohl, who isn't nominated in any category, was asked to perform, which was the final straw. "Last night I tried to force myself to get on the plane to fly to L.A. for all the nominee events, but the feelings of embarrassment and anger knocked me back, and I couldn't get on the plane," she says. "I imagined how it would feel for me to sit amongst all those Hollywood stars, some of the brave ones approaching me with sad faces and condolences. There I was, feeling a sting of shame that reminded me of America's earliest affirmations of my inadequacy as a transperson."

Anohni knows she wasn't excluded from the Oscars because she's a transgender woman, but says the decision plays into a greater narrative of oppression:

"If you trace the trail of breadcrumbs, the deeper truth of it is impossible to ignore. Like global warming, it is not one isolated event, but a series of events that occur over years to create a system that has sought to undermine me, at first as a feminine child, and later as an androgynous transwoman. It is a system of social oppression and diminished opportunities for transpeople that has been employed by capitalism in the U.S. to crush our dreams and our collective spirit."

The Academy has not commented on Anohni's statement, but can we all agree that this is a "look at your life, look at your choices" moment?