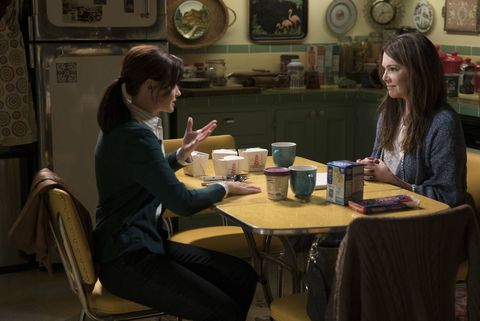 When you watch the anxiously awaited new season of Gilmore Girls on Netflix, you'll be watching it in a whole new way. The revival series will take place in four long episodes instead of several short ones, so it'll be like watching a few movies instead of the original series.

Lauren Graham spilled the beans on The Ellen DeGeneres Show, which films on the same lot as Gilmore Girls. "It's been the most incredible experience," she said. "I cry trying to talk about it because I feel so lucky to get to do it."

The show will be called Gilmore Girls: A Year in the Life, and it will consist of four 90-minute episodes. Each episode will correspond with a season, so we'll get to see Stars Hollow in winter, spring, summer, and fall. Graham said they're almost done filming the season, but Netflix hasn't announced a release date yet.

Here's the new promo poster for the show, which (of course) features a cup of hot coffee:

And here's the animated version, which gives you the sense of calm you need while you anxiously await the premiere:

It's official. We know this because now there's a title. #GilmoreGirls pic.twitter.com/kOVW3rEhMk

Watch Lauren Graham confirm all the details on Ellen below. She'll probably give the world even more on Monday, when her full episode airs.

This content is created and maintained by a third party, and imported onto this page to help users provide their email addresses. You may be able to find more information about this and similar content at piano.io
Advertisement - Continue Reading Below
More From Culture
Talk Race & Friendship With 'We Are Not Like Them'
'The Great British Baking Show' Is Back!
Advertisement - Continue Reading Below
Let's Get to Know 'Sex Education' Newbie Dua Saleh
The 'Squid Game' Ending, Explained
'NPS' Director Just Teased a Second Season
Iconic Fall Movies to Get You in the Spirit
The "Berries and Cream" Trend on TikTok, Explained
Fans Are Already Clamoring for 'Sex Education' S4
What to Watch After You Finish 'Squid Game'
The Best Feel-Good Movies to Curl Up With