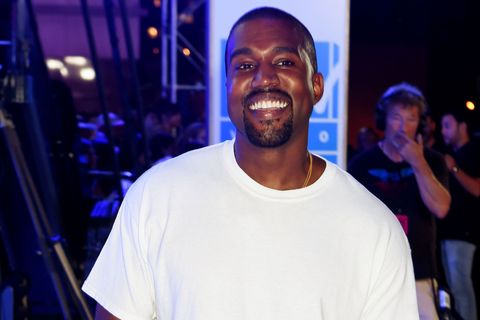 When we heard Kanye West was given four minutes of free reign to do literally whatever he wanted onstage at the VMAs this year, we conjectured: would he throw some shade at Taylor Swift, knowing that she wasn't booked to attend this year? Would he give a wild shoutout to his sheer-dress-clad wife Kim K., after posing with her on the red carpet earlier that evening? Would he deliver another one of his signature "I'm so misunderstood" speeches?

Time would only tell. Kanye was reportedly all "shruggie emoji" about attending his run-through for the show earlier, and we all know off-the-cuff Kanye is the best Kanye.

In a rambling speech in which he referenced the hubbub over his "Famous" video by saying, "We came over in the same boat, now we're in the same bed," he also gave a shoutout to Amber Rose, and yes, Kim for being a total "G." And finally, the quote we all came here for, he said his piece on the Taylor episode by simply saying, "I love all y'all. That's why I *called her*."

See footage from the glorious, unbridled Kanye rant below: