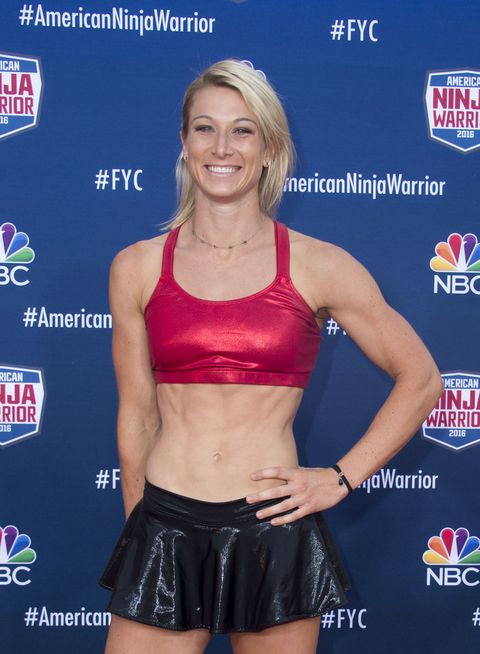 If you're not already familiar, American Ninja Warrior has undeniably raised the bar for game shows by sending contestants through impossible obstacle courses and severely testing athletic ability for our viewing pleasure.

On Monday, Stuntwoman Jessie Graff made show history after becoming the first woman to complete Stage 1 in the show's national finals. And if being a #GIRLBOSS wasn't enough, Graff conquered the obstacle course with 12 seconds to spare wearing a custom-made, Green Lantern costume in all its sparkling, mini-skort glory.

The 32-year-old Graff, who's done stunts on Supergirl (how fitting), went on to the finals after running record time in Los Angeles. At the finals, she flew through the course without even a stumble causing many onlookers to claim the sequence was "too easy."

Regardless, Graff's talent, and body rivaling Teyana Taylor's, is an inspiration to female athletes everywhere as well as the rest of us normals. In an interview with USA Today, Graff said she wants her appearance on the show to demonstrate female power. "My first year doing Ninja Warrior, I didn't really know what it was about. After that, when so many people were like, 'I didn't know women could do that,' I thought, 'Then, we better show you."

Watch her destroy Stage 1 below.

Simedar Jackson I'm Simedar, an intern here at MarieClaire.com!
Advertisement - Continue Reading Below
More From Culture
HBO Is Making Iconic Shows & Movies Free to Watch
Tim Gunn & Heidi Klum Also Wear PJs to WFH
Advertisement - Continue Reading Below
'Parasite' Is (Finally!) Coming to Hulu
The Best Teen Movies of 2020
Family Movies Both Grown-Ups and Kids Will Love
The Best Wedding Movies of All Time
Read 'Anna K' Even If You Didn't Read the Original
19 Most Underrated Films of All Time
The Music Podcasts We Keep Pressing Play On
Why You Keep Seeing "Until Tomorrow" on Instagram