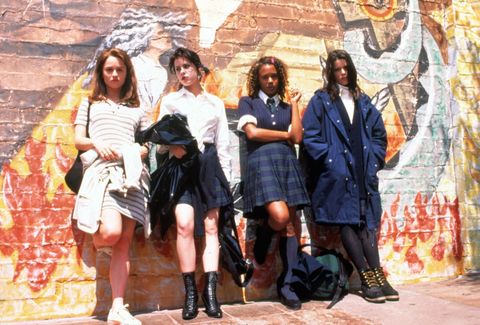 If you grew up in the '90s, you probably remember watching (and loving) The Craft. It was the movie for the rest of us. The others. The outsiders. It was for the girls who couldn't relate to the characters in Clueless, but were still in search of authentic representation on screen.

By 2016 standards, The Craft doesn't initially appear to be a work of feminist filmmaking. But for a teenager in 1996 who was unsure of her place in the world, it appealed on a deeply powerful level. The Craft celebrated the unconventional girl. It encouraged teens to shake off the non-stop, crippling fear of not fitting in, and embrace the power of being different. And it hit theaters during a time when cinema just wasn't advocating female outsiderdom.

The '80s and '90s were, instead, a prolific time for exalting the outsider boy (see the aptly-titled The Outsiders, Stand By Me, and The Goonies), but representation of young women was disappointingly limited to traditional caretaker roles (see The Babysitter's Club). On the rare occasion that an outsider female was represented—like Allison in The Breakfast Club or Tai in Clueless—her differences were washed away by popular girls and makeovers.

It was the movie for the rest of us. The others. The outsiders.

But what really set The Craft apart was its brilliant deconstruction of the age-old witch metaphor. Witches have long been portrayed as intimidating, power-hungry, and typically hideous women who want more than men will give them. Witches are an easy allegory for the "nasty woman," but Craft writer Peter Filardi turned that allegory on its head. He used witchcraft as a tool for female empowerment instead of using it a tool to intimidate women into obeying the patriarchy.

Thanks to flipping the witch trope, The Craft managed to not just represent, but popularize a type of girl who'd been ignored onscreen. The main characters truly believed that being labeled "weirdo" was cool—or at the very least, more empowering than being popular—and the film proved that a) there's a huge appetite for movies about female outsiders, and b) strong female characters can 100 percent fill seats. After its release, theaters were populated by a wave of teen films celebrating female outsiderdom: The Virgin Suicides, Practical Magic, Jawbreaker—these themes can even be found in the long-running series Charmed.

'The Craft' celebrated the unconventional girl. It encouraged teens to shake off the non-stop, crippling fear of not fitting in, and embrace the power of being different.

Sure, The Craft's shortcomings become glaringly obvious when watching through a 2016 lens, and some plot points aren't particularly feminist in spirit (ahem, casting spells to make a guy love you). But it still broke the mold by showing teen girls the power of sisterhood and the importance of defying gender roles.

Like every cult classic, there's a present-day revamp in the works—and while it might be a disappointment to die-hard fans, The Craft is ripe for a retelling. The bones of a feminist film are there, leaving an opportunity to tell the truly empowering story of what happens when girls lift each other up—sometimes literally.

This content is created and maintained by a third party, and imported onto this page to help users provide their email addresses. You may be able to find more information about this and similar content at piano.io
Advertisement - Continue Reading Below
More From Culture
What Is Stephanie Land Doing Now?
'Succession' Is Ready to Go 'Full F*cking Beast'
Advertisement - Continue Reading Below
The 2021 Book Releases You Don't Want to Miss
'Squid Game' Season 2: Everything We Know
Breaking Down the Ending of 'Maid'
The Best Dating Sites, Once and For All
How to Make a 'Squid Game' Halloween Costume
All the Deets on Michelle's 'Bachelorette' Season
'Bridgerton' Season 2: Everything We Know
Watch the First Bloody Trailer for 'You' Season 3