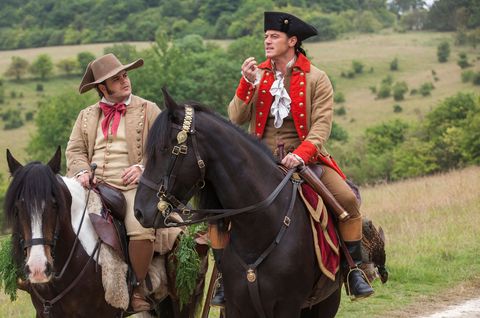 In truly groundbreaking news, the new live-actionBeauty and the Beast (starring Harry Potter's very own Emma Watson) will feature an openly gay character. And trust: this is a first for Disney.

"LeFou is somebody who on one day wants to be Gaston and on another day wants to kiss Gaston," director Bill Condon tells Attitude. "He's confused about what he wants. It's somebody who's just realizing that he has these feelings. And Josh makes something really subtle and delicious out of it. And that's what has its payoff at the end, which I don't want to give away. But it is a nice, exclusively gay moment in a Disney movie. It may have been a long time coming but this is a watershed moment for Disney."

Condon continues, "By representing same-sex attraction in this short but explicitly gay scene, the studio is sending out a message that this is normal and natural—and this is a message that will be heard in every country of the world, even countries where it's still socially unacceptable or even illegal to be gay."

Considering Beauty and the Beast is set to be a giant box office win targeted largely toward children, this is a major moment for LGBT visibility.

Mehera Bonner Contributor Mehera Bonner is a news writer who focuses on celebrities and royals—follow her on Instagram.
Advertisement - Continue Reading Below
More From Culture
The Best Korean Dramas of All Time
Mainstream Movies With * A LOT * of Nudity
Advertisement - Continue Reading Below
Things Between Victoria F. and Chase Rice Got Ugly
Who Are the Women of 'The Bachelor' in 2020?
Rosalía Is the One to Watch at This Year's Grammys
Sydney From the 'Bachelor' Knows Hannah Brown
The 10 Hottest Movies on Hulu Right Now
'The Bachelor' Has Already Finished His Season
When Michelle Carter Is Expected to Walk Free
How Much Time Did Michelle Carter Get in Prison?