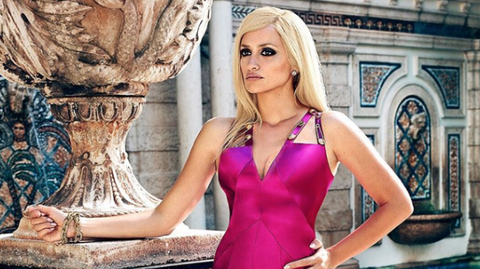 The first pictures from The Assassination of Gianni Versace: American Crime Story are here, and we are already obsessed. EW offers up the first-look photographs, which show off the show's central cast members including Edgar Ramirez as Gianni Versace, Penelope Cruz as Donatella Versace, Darren Criss as serial killer Andrew Cunanan, and Ricky Martin as Versace's longtime partner Antonio D'Amico. (New Girl's Max Greenfield has also been cast in an unknown role.)

You're gonna want to click through to EW to see the Ricky Martin shot. Trust.

Following the success of The People v OJ Simpson, FX is continuing American Crime Story as an anthology series, with each season focusing on a new true crime. The Versace installment was originally slated to air as season three, but it was announced last week that it had been moved up to season two, likely airing early in 2018.

Adapted from the true crime book Vulgar Favors by Maureen Orth, the series will chronicle the 1997 murder of Versace. Cunanan shot Versace dead on the steps of his Miami Beach home after committing several other murders. He committed suicide eight days later.

Emma Dibdin Contributor Emma Dibdin writes about television, movies, and podcasts, with coverage including opinion essays, news posts, episodic reviews and in-depth interviews with creatives.
This content is created and maintained by a third party, and imported onto this page to help users provide their email addresses. You may be able to find more information about this and similar content at piano.io
Advertisement - Continue Reading Below
More From Culture
It's Time To Binge Hulu's Best Documentaries
When Will 'The Crown' Season 5 Be on Netflix?
Advertisement - Continue Reading Below
'The Undoing' Season 2: Everything We Know
Cute Gift Ideas for Every Woman in Your Life
'The Undoing' Differs Sharply From the Book
'The Undoing' Is Packed With Stars
Differences Between 'The Undoing' Book and Novel
It's Been a Weird Year for 'The Bachelorette'
Did Princess Diana Really Dance to 'Uptown Girl'?
'Bachelorette' Frontrunner Brendan Is an Actor