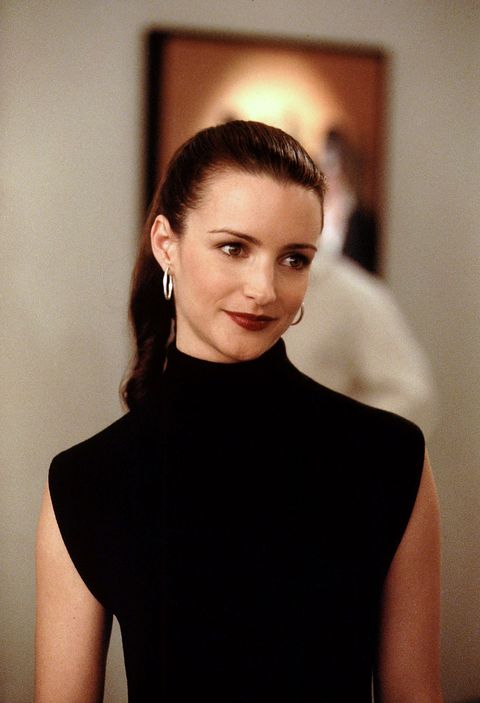 If you binge-watch Sex and the City reruns for the same reasons you first fell in love with the iconic raunchy girl-power series (Carrie's shoes, Samantha's amazing one liners...), you're not alone. But there's one character who doesn't quite translate: Charlotte York. The woman who once said "everyone needs a man" is even more dated than that infamous post-it note break-up (2017 Berger would've just sent a text).

Charlotte–the Connecticut-bred art enthusiast who's afraid of the word "penis" and shares a wardrobe with Martha Stewart—is everything that women today are not. She is dependent, helpless, and an avid slut-shamer. Her main goal in life is to marry a rich NYC man and score a Park Avenue apartment (which she did…twice).

"Charlotte–the Connecticut-bred art enthusiast who's afraid of the word penis and shares a wardrobe with Martha Stewart—is everything that women today are not."

Charlotte quits her esteemed position at an art gallery after marrying Trey—a rich doctor who she only settled for because of the checklist requirements he met initially (money, stability, looks, etc.). At one point, she refuses to give Carrie a loan on the grounds of, "You are a 35 year-old woman. You have to learn to stand on your own," which is ironic, considering Charlotte herself was living off of the million-dollar settlement from her divorce at the time. She claims that women need to be "rescued" by men, and believes females should change for their partners "because we are more adaptable." She also repeatedly scolds Samantha for having one-night-stands, despite the fact that she exhibits identical behavior.

I feel the same way about Charlotte that my grandmother did about Samantha: cringe-worthy.

Women in 2017—even if it's a joke—still identify as specific SATC characters. (See: Girls' Shoshanna circa Season One.) Being a "Carrie" or a "Samantha" defines who you are and becomes a quick and efficient way to categorize the female friends in your life. Today, most women are not "Charlottes," but rather "Mirandas"—liberated, career-driven females who, while desiring romantic relationships, have not built their life goals around them. Among millennials, Charlotte has replaced Miranda as the most loathed character, as Miranda's once "annoying" qualities of independence, intelligence, and—for lack of a better word—ballsy-ness somehow look much more admirable.

Related Stories
These Are the Best New Shows on TV
I Watched \'Sex and the City\' for the First Time
Does the Style in \'SATC\' Still Hold Up?

And she deserves the praise. Think about it: no one is more persistent in countering Charlotte's Victorian beliefs than Miranda. When Charlotte advises her not to buy an apartment because, "if you own and he still rents, then the power structure is all off," Miranda essentially says, "f*ck you" and purchases her very own one-bedroom on the Upper West Side. She mocks Charlotte's rules for single women who want to get married, and questions her decision to marry Trey so quickly. ("You just met! I've had pair of pantyhose longer.") Miranda firmly stands her ground on every issue and never allows another person—especially trophy-wife Charlotte—to tell her how to live her life.

While Charlotte isn't exactly the antichrist (she did provide us with the meme-worthy quote about girlfriends being your soul mates), she's simply something we've outgrown. She embodies a female persona of the past, and it's a frightening reminder of what was and what still could be.

And for the record, I'm a Miranda—with a better wardrobe.