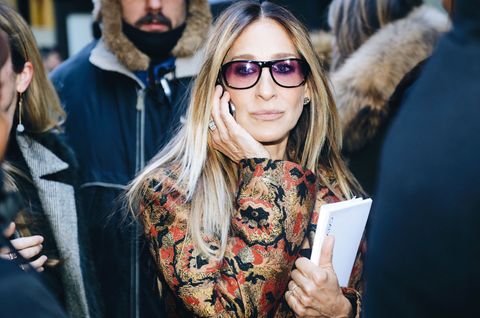 No one was quite sure how New York Fashion Week would respond in its first post-election season. Would designers avoid or embrace political statements? Would celebrities stay home?

Before the lights went down and the models took charge, we nabbed Parker for a quick about everything from Trump's impact on fashion to what's on her docket next.

On whether 'Sex and City 3' is happening:

"It's in a warming drawer. It's never been a 'no'...it's always been an 'if' and 'when.' And that remains the question being asked by two very thoughtful people who are taking into very serious consideration those people who devoted a lot of time. We're not cavalier about the way we arrive at that decision."

On the impact President Trump will have on fashion:

"I'm not certain yet. You may be surprised to know that I don't typically keep up with all of it. But I think it's highly likely that you will see a lot of commentary in art and fashion and literature and architecture and dance and publishing. I think there's a long tradition of art and culture responding to political times. In the instance of fashion, you can see it more quickly.

Gurung and Parker after the show
Getty Images

But typically those movements surface in years' time; it doesn't usually get to answer right away, except in more rogue street art and things like that. But I'm excited about what these times will offer. I think it's really important for history, no matter where one stands. I think it's good for us to talk about it and witness it. Fashion and the fine arts and literature have a wonderful way of voicing those thoughts."

On Mikhail Baryshnikov's inspiring response to the Bush era:

"His background allowed him to look at government in a very specific way. He left a country because of how it made him feel as an artist and as a human being, so he is a very interesting person to have a conversation with about these times."

On executive producing and starring in 'Divorce':

"My company started developing the show about five years ago. It's been a really wonderful effort and a very exciting effort. I'm so proud of the show and the people I get to work with. We start shooting the second season next month.