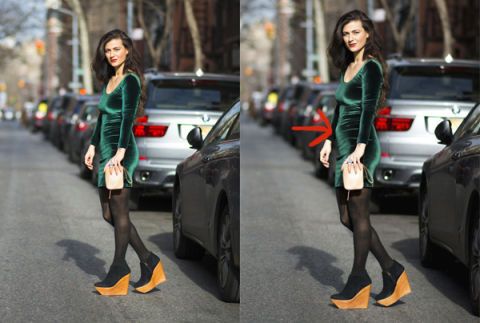 Courtesy of Do The Hot Pants

With more and more companies pledging to drop the use of Photoshop and airbrushing in their images, it seems that others are following suit. Fashion blogger Dana Suchow, better known by her online alias Do The Hotpants, made a pretty big confession: she's been Photoshopping some of the images that appear on her website. It isn't many images, just four of the thousands of images to have appeared on Suchow's blog in the past. Suchow says that she was compelled to be honest and transparent with her readers about the images she's fiddled around with.

The changes aren't much—in fact, it's understandable if you miss them the first time looking over the images side-by-side. Look closer, and you'll see a slight shaving of the stomach, or correcting of a blemish on her face. Suchow says that her stomach and skin have been a source of insecurity for her throughout her life, so understandably, giving readers access to these raw images was a challenge for her. "I'm putting my flaws out there, as little or as big as they seem, so please respect that this isn't easy for anyone," she wrote in the post. She reminds her readers that even the people you look up to are flawed—a sentiment that couldn't have more truth to it. Not only is revealing your insecurities scary enough, but admitting to changing your photos takes serious guts. Kudos to you, Hotpants!

Photo via Do The Hotpants

Diana Pearl Producer Diana is a producer at ELLE.com.
This content is created and maintained by a third party, and imported onto this page to help users provide their email addresses. You may be able to find more information about this and similar content at piano.io
Advertisement - Continue Reading Below
More From Fashion
Back to Basics: How To Build a Minimalist Wardrobe
Michelle Obama Stuns at Biden-Harris Inauguration
Advertisement - Continue Reading Below
Jaclyn Rothenberg Pursues Pantsuits In Every Color
What to Buy From Madewell's Secret Stock Sale
What Biden's Family Wore on Inauguration Night
Your Girlfriend Will Approve of These Chic Gifts
The Softest, Coziest, Warmest Socks You Can Buy
Why Everyone Wore Monochrome to the Inauguration
See Kamala Harris's Sequin Inaugural Concert Look
Jill Biden Looks Chic at Inauguration Concert