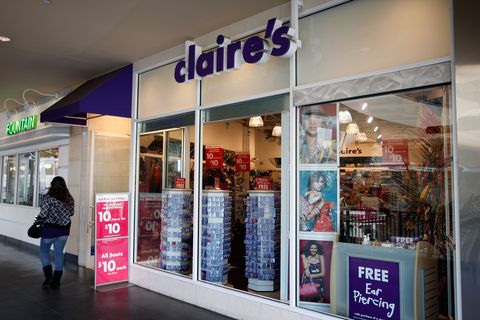 Claire’s, a mecca for middle school girls who want cheap accessories and free ear piercings, is reportedly about to make a drastic move to deal with its financial issues. Bloomberg, citing unnamed sources, reports that Claire’s is preparing to file for bankruptcy in the next few weeks, and would pass control of the chain from their parent company, Apollo Global Management LLC, to lenders who would help ease the company’s $2 billion in debt.

According to The Hollywood Reporter

The company has lately been struggling with dwindling customer numbers and competition from online retailers, and has been trying to get its products in other stores like drugstores or supermarkets. And of course, it’s one of many retailers that are dealing with financial struggles, from Macy’s to Payless ShoeSource to Toys R Us.

The Independent notes that Claire’s sells its products in 4,220 locations in 45 countries; it’s also apparently the world’s most popular ear piercer, with 3 million ears pierced at Claire’s each year. And of course, it’s essentially the number-one retailer for kids’ first school dances and princess Halloween costumes. If this bankruptcy deal leads to Claire's closing up shop, girls across the country will lose a favorite, and so will grown-up women who remember the chain fondly. Even if those tiaras and earrings broke after two minutes of wear.

This content is created and maintained by a third party, and imported onto this page to help users provide their email addresses. You may be able to find more information about this and similar content at piano.io
Advertisement - Continue Reading Below
More From Fashion
The Bag Trends We're Predicting for Winter
The Biggest Trends From the Spring/Summer Runways
Advertisement - Continue Reading Below
Halloween Costumes You'll See Everywhere This Year
Our Favorite Looks From Milan Fashion Week
These Cute, Sustainable Shoes Feel Great
Marie Claire
+
Vionic
Add Some Sparkle With These Winter Jewelry Trends
Found: Our New Favorite Pajamas
The Winter Trends to Start Investing In Now
Your Back-to-Office Style Guide Is Here
Anya Taylor-Joy Was a High-Fashion Princess