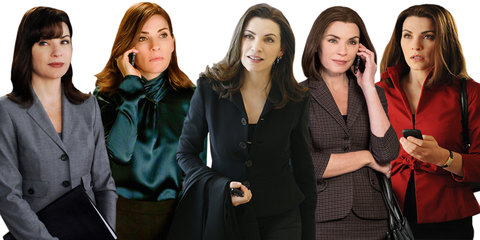 All Good (Wife) things must come to an end, but after seven seasons, the show and its costumes have racked up more than enough accolades—and, you might say, a lasting impact on women's fashion—to make its May 8 end feel more like pause than a true finale. With an emerald blouse here and a cut-your-finger sharp Roland Mouret jacket there, costume designer Dan Lawson has steered heroine Alicia Florrick and the rest of the cast through thick and thin, creating a stylized, carefully considered world in the process.

Here, Lawson talks dressing Alicia to reflect her growth, home clothes, and what feminism has to do with it all.

Marie Claire: Let's just get into it. How have we seen Alicia change as reflected through her wardrobe?

Dan Lawson: I started as the costume designer on the first episode we shot with the series, when it was very much rooted in character work. Her first season was very much about mix and match—it was about taking pieces she already had because she didn't have money to get a whole new wardrobe to start work, and it was about taking those pieces and making them work as a lawyer. The other part of it was, because of the scandal, all she wanted to do was blend into the background. She was tired of having everyone look at her. But the reality is, Julianna Margulies is the star of the show, and we still want her to stand out but blend into the background. We went with very sort of plain things, very simple, a lot of black, neutrals, but I would say conscientious neutrals. There wasn't a lot of design detail; we went very simple for her that first season.

Some of that came from Julianna herself. She said "I don't think I would take the time to be putting on jewelry, and dealing with that. My whole thing is I can hardly get the kids out the door and get to the office." Because everything's new for her. Then, as we started to move along in the second and the third season, she really became much more about hitting her stride with who she was as a single woman, who she was as a mother, who she was as a lawyer, and who she was as a sexually viable woman again.

By the third season we were doing this—Julianna and I joke around that it was this sort of Rosie the Riveter—'40s-inspired look, like little peplum jackets, detailed pockets, stronger shoulders. It was just sort of hearkening to the '40s, which was wonderful, even though the look was decidedly modern. By the time we were going into the fifth and sixth seasons, she was really feeling confident as a lawyer. We were moving away from that suburban look to a much more city/urban look with her, and I think she was taking cues from her boss, played by Christine Baranski.

This season, our whole mantra, if you will, was comfort. I'd be like "Is this comfortable?" And she'd be like "Well...", and then I'd be like "Then let's not do it." It's still elegant and neutral-toned. And of course her hair has changed over the years...

MC: About that comfort element—something that's not talked about very much is Alicia's home clothes. It's so interesting that even when she's alone and relaxed you still don't see her wearing an old college T-shirt.

DL: I would say her comfortable clothes at home are like jeans and a cashmere sweater and a very simple cashmere throw, and some of that comes from being very classic. The Good Wife is a very elegant show, so we wanted everything to look elegant, pristine, clean. Our idea of a really dirty alley would be like one little word written on a wall and one piece of garbage. In that sense, it's not realistic, and we sort of push the envelope.

When she is at home and looking comfortable or not comfortable, our thing was "Does work enter the home?" It was always a decision for us throughout all seven seasons, whenever she was home—do we want the feeling of work there? Or do we want her to be more like "mom" but our version of mom? So if we didn't want work there, it would always be sort of jeans and cashmere sweaters, and those wonderful Vince cardigans and that sort of thing. Or is she at home in the kitchen trying to get dinner together but still in her work clothes? Is work imposing on her home life?

"We set out to have women look feminine in the workplace and not look like men. We have three strong female leads on this show, why do we want to dress them in a masculine style? They can look strong and feminine and elegant and powerful, all at the same time."

MC: What I really like is how, even though it's a very "done" world, you still think so much about the reality of it—so much so that real, professional women treat The Good Wife as a model, right?

DL: We didn't give them a model, but I think people right away picked up on it. I'm telling you: Within the first month of the show airing, Julianna and Christine would both come in and say "Oh my gosh, this lawyer stopped me on the street. She was so excited. She said, 'Now I know what I can wear to the office, and it doesn't look like men's clothing.'" One thing we set out to have women look feminine in the workplace and not look like men. We didn't want them to look masculine. We have three strong female leads on this show, why do we want to make them look like men? Or why do we want to dress them in a masculine style? We want them to look strong, and feminine and elegant and powerful, all at the same time.

MC: Before this show, there really was a dearth of people you could look to for inspiration.

DL: I think that in the workplace eight or nine or 10 years ago, it was sort of lost. People did try to dress, but it was still sort of masculine. I think once people saw on our show, they saw, "Oh, I can dress in a color other than grey or black, and I can actually wear a deep red or whatever color it may be." Once women saw that on our show, they responded to it. We sort of lost this sense of how to dress for work, how to look individual and how to look elegant.

Twenty years ago, I worked for this executive producer at One Life to Live, Linda Gottlieb. She looked feminine and powerful and elegant—everything we wanted. I have to say Linda stuck in my head a little bit when I was designing The Good Wife. I just thought, "That's beautiful. And it's okay for work. So let's do it." Women are finding a sense of security in who they are. It's been a man's world forever, and I think that's old news.

"It's been a man's world forever and I think that's old news."

DL: Think about what's appropriate for where you are, for what your day holds. It's really important to set aside a certain amount of your budget for alterations—that's a way we can have the less expensive clothing look like it's much more expensive. It's also important to spend a little extra money on staples in your closet, the things that are really going to be your workhorse pieces—a really good skirt, a good suit, really good shoes, a good bag. That's very much what we did with my ladies on the show. We spent the money on those core pieces. And the other thing that's important to remember is that if you have a really big day coming, and you want to impress, don't overdo it. People are like, "Oh, it's a big day, I'm going to wear my favorite skirt and my favorite jacket and the best jewelry, and this and that," and suddenly, it becomes too much. You need to pick the star of your outfit, then work the other pieces of your outfit to support it.

"I really think it's so important that women feel good in what they're wearing. They should just know what's in their closet, what's going to make them feel good, and look good."

MC: Dan, this got unexpectedly feminist. I love it.

DL: I really think it's so important that women feel good in what they're wearing. The last thing women should think about are their clothes when they're trying to get ready for work or  whatever. They should just know what's in their closet, what's going to make them feel good and look good. They don't even have to think about it—they can just go out and be themselves.

Did we tell you about that one time we visited the set of The Good Wife? And wandered around the wardrobe department? Watch a video of our meeting with Lawson here.

This content is created and maintained by a third party, and imported onto this page to help users provide their email addresses. You may be able to find more information about this and similar content at piano.io
Advertisement - Continue Reading Below
More From Fashion
Spring Skirts to Skip Into Warmer Weather With
The Sandals Brands We Can't Get Enough Of
Advertisement - Continue Reading Below
Found: House Dresses You'll Live In
Angelina Jolie's Senreve Tote Is On Sale Today
Denim Jackets You Can Wear All Year Long
Your Go-To List of the Coolest White Sneakers Ever
Cute Gym Bags You Won't Mind Schlepping to Work
Summer Color Trends That Double as Mood Boosters
Bucket Hats to Top Off Any Outfit With
Found: Long Pendant Necklaces You'll Wear Forever